The EU has offered to double aid for Syrian refugees in Turkey, as it bargains with Ankara to do more to stop migrants arriving on Greece’s shores. At an emergency summit in Brussels, EU leaders promised Turkey €6bn (£4.6bn) over three years, twice the €3bn offered last November, according to an EU source. Turkey’s prime minister, Ahmet Davutoğlu, pledged “new” ideas for solving the crisis, but told European leaders Turkey wanted more for its citizens in exchange for helping the EU. He called for visa-liberalisation for 75 million Turks by 1 June, an advance on the October deadline proposed last year, as well as re-starting Turkey’s long-stalled EU accession talks.

The EU and Turkey are also discussing a plan to resettle one Syrian refugee in Europe for every Syrian returned to Turkey from the Greek islands. European officials are investigating whether this is “legally and logistically possible”, said a source.

Ahead of the summit, the Turkish president, Recep Tayyip Erdoğan, said his country had already spent $10bn (£7bn) helping 3 million refugees living in Turkey who have fled the war in Syria.

Last year, the EU promised €3bn to feed and house refugees in Turkey, in exchange for more action from Ankara to tackle people-smuggling and reduce the flow of people arriving on European shores.

Erdoğan, who is not at the summit, voiced his frustration at the EU’s failure to deliver the money promised last November.

“They promised to give us €3bn, four months have passed since then,” Erdoğan said. “The prime minister is in Brussels right now. I hope he returns with that money.”

The summit comes at an awkward moment for EU-Turkey relations, after the Turkish government seized control of Zaman, the country’s biggest daily newspaper, which had been critical of Erdoğan and his Justice and Development party.

The EU’s foreign policy chief, Federica Mogherini, urged Turkey “to respect the highest standards” on democracy, the rule of law and freedom of expression. She also called on Turkish authorities to engage with peaceful Kurdish groups to restart stalled peace talks.

A bigger priority for Turkey at the summit is breathing new life into talks on joining the EU. Arriving at the meeting, Davutoğlu said the EU and Turkey were at a turning point in their relations: “Turkey is ready to be a member of the EU.”

The summit agenda was torn up after Davutoğlu arrived with a list of “new elements” for tackling the migration crisis. Over a lunch of celery soup, carrot flan and sole fillet, Davutoğlu called for more funding for refugee aid projects, as well as progress on Turkey’s EU membership talks.

Talks with Turkey will resume over dinner on Monday, after the EU 28 hold a separate discussion on tackling the refugee crisis inside Europe. “It will not be a short summit,” said one diplomat.

Turkey is expected to announce it will take back people who do not qualify for asylum in Europe, following an agreement struck last week. But human rights groups have said these arrangements could be in conflict with the Geneva convention.

Miltiadis Kyrkos, a Greek MEP who is vice chair of the European parliament’s joint committee with Turkey, compared Ankara’s diplomacy to “an eastern bazaar”, as it seeks to extract the maximum from the talks.

“The crucial point is on Monday to know if Turkey is a player on our side, because up to now they declare they are on our side but they don’t do anything to prove that.”

He also criticised Europe for failing to deliver last year’s €3bn. EU leaders signed off the money last month, but aid projects have not arrived on the ground. The EU executive announced last Friday it will spend €95m on providing food and schooling for Syrian refugees in Turkey, from a different pot of money.

In the background to the Turkey talks, EU leaders were at loggerheads over managing refugees in Europe. Germany objected to an early draft of the summit communique that declared the closure of the western Balkan route, used by refugees and migrants travelling from Greece to northern Europe. 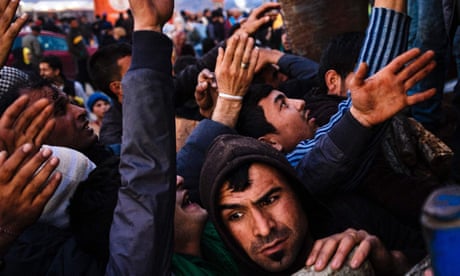 According to German media, the chancellor, Angela Merkel, thought it wrong to announce the closure of the route when Syrians and Iraqis are entitled to asylum under EU law. In reality, the vast majority of refugees and migrants in Greece are already barred from using the route, with at least 35,000 stuck in Greece. Conditions at the Idomeni camp near the Greek-Macedonian border, where 13,000 are stranded, are increasingly desperate, with limited supplies of food and water.

EU leaders are expected to declare they will “stand by Greece in this difficult moment”, according to the summit communique, which states the crisis is “a collective EU responsibility”.

But European unity has been stretched to breaking point, with countries taking unilateral action to reintroduce border controls across the passport-free Schengen zone. EU leaders will call for all controls to be lifted by the end of the year.

Arriving at the EU-Turkey summit in Brussels, David Cameron said there was no prospect of the UK joining a common European asylum policy.

The UK is not in the passport-free Schengen zone, although it is signed up to the EU’s Dublin regulation, which obliges member states to take responsibility for refugees who arrive in their country first.

The Dublin system is on the brink of collapse, after more than a million refugees and migrants arrived in Europe in 2015, while up to 2,000 continue to land in Greece every day. In the coming days the European commission will outline plans to overhaul EU asylum policy, with the aim of stopping people being waved through border checkpoints and travelling to a country of their choice. The UK can choose whether it joins the new system.

The prime minister said the British opt-out underlined the UK’s “special status” in the EU, a phrase he has used heavily since securing a reform deal with other EU leaders earlier this month.

“We have an absolutely rock-solid opt-out from these things, so there is no prospect of Britain joining a common asylum process in Europe. We will have our own approach, our own way of doing things, keeping our own borders. It underlines the best of both worlds, the special status we have.”

Cameron added that it was “important that we help the continent of Europe to secure its external border” and “that is why we are sending British ships to do just that”, referring to a Royal Navy deployment in the Aegean announced on Monday.