The full scale of the financial rout facing millennials is revealed today in exclusive new data that points to a perfect storm of factors besetting an entire generation of young adults around the world.

A combination of debt, joblessness, globalisation, demographics and rising house prices is depressing the incomes and prospects of millions of young people across the developed world, resulting in unprecedented inequality between generations.

A Guardian investigation into the prospects of millennials – those born between 1980 and the mid-90s, and often otherwise known as Generation Y – has found they are increasingly being cut out of the wealth generated in western societies.

Where 30 years ago young adults used to earn more than national averages, now in many countries they have slumped to earning as much as 20% below their average compatriot. Pensioners by comparison have seen income soar.

In seven major economies in North America and Europe, the growth in income of the average young couple and families in their 20s has lagged dramatically behind national averages over the past 30 years.

In two of these countries – the US and Italy – disposable incomes for millennials are scarcely higher in real terms than they were 30 years ago, while the rest of the population has experienced handsome gains.

It is likely to be the first time in industrialised history, save for periods of war or natural disaster, that the incomes of young adults have fallen so far when compared with the rest of society.

Experts are warning that this unfair settlement will have grave implications for everything from social cohesion to family formation.

A two-week Guardian project, supported by the Joseph Rowntree Reform Trust, aims to explore this predicament in depth and ask what can be done.

Using exclusive data from the largest database of international incomes in the world, at LIS (Luxembourg Income Study): Cross-National Data Center, the investigation into the situation in Australia, Britain, Canada, France, Germany, Italy, Spain and the US has also established that:

“The situation is tough for young people,” said Angel Gurría, secretary general of the west’s leading thinktank, the Organisation for Economic Cooperation and Development (OECD). “They were hit hard by the Great Recession, and their labour market situation has improved only little since.

“This is a problem we must address now urgently. Kicking it down the road will hurt our children and society as a whole.”

Gurría said there had been a shift since the mid-80s in poverty rates, which started to rise among younger cohorts while falling among pensioners. However, the world of barren opportunities facing today’s young people should be of concern to all age groups, he added.

“Current working-age, middle-class groups are increasingly concerned with their and their children’s job prospects. An increasing number of people think children in their country will be worse off financially than their parents,” he said.

Using LIS’s household survey data, the Guardian examined the disposable incomes and wages of young families in eight of the 15 largest developed economies in the world. Together these countries made up 43% of the world’s GDP in 2014.

These surveys, carried out over decades, are intended to pick up what is happening on the ground in people’s homes, and are the best way of distilling domestic realities from governmental level data. 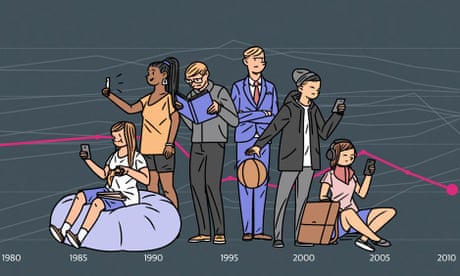 The data accessed by the Guardian found that in the US, France, Germany, Italy and Canada the average disposable income of people in their early 20s is more than 20% below national averages.

For the first time in France, recent pensioners generated more disposable income than families headed by a person under 50. In Italy the average under-35 became poorer than average pensioners under 80. Using the most recent US data, in the midst of the downturn in 2013, average under-30s had less income than those aged 65-79. This is the first time that has happened as far back as the data goes.

Millennials interviewed by the Guardian said they felt their generation was facing far greater hurdles to establish themselves as independent adults than previous generations did.

Fiona Pattison, a 30-year-old accounts director at a fundraising agency, said that despite pay rises and promotions her lifestyle hadn’t changed in six years. “Everything I’ve made in terms of a pay rise has gone into living and saving. My lifestyle has remained exactly the same. Any dent in employment or income would mean I’d have to go back to sharing again.”

Londoner Tanaka Mhishi, who works in a bookshop, adds: “I definitely think in a lot of ways my parents’ generation was luckier. They had a lot more freedom to do things younger: they were able to go straight from university and move to London and afford their own flat.

“We definitely have to make more compromises. Compromises like if I want to have kids by the time I’m 30, or even 40, can I still have the career I want to do?”

Several economists told the Guardian that policymakers should do more to even up the balance between young and old to avoid economic stagnation.

Paul Johnson, director of the Institute of Fiscal Studies, said he feared intergenerational inequality would fuel wider inequality in society because youngsters with rich parents would retain such an unfair advantage in the important years of early adulthood.

Johnson said: “I think the real unfairness issue comes in the sense that it’s become more and more important whether your parents happen to have a house.”

For the next fortnight the Guardian will delve into the fortunes, feelings and finances of the developed world’s young adults, as well as looking at fallacies surrounding them.

In our series, we will reveal that today’s young people are not delaying adulthood because they are – as the New Yorker once put it – “the most indulged young people in the history of the world”. Instead, it appears they are not hitting the basic stages of adulthood at the same time as previous generations because such milestones are so much more costly and in some cases they are even being paid less than their parents were at the same age.

In Australia, millennials are being inched out of the housing market. In the UK, new figures will show the notion of a property-owning democracy has already been terminated. In the US, debt is the millennial millstone – young people are sitting on $1.3tn of student debt.

Across Europe, the issue centres more around jobs – and the lack of them. The numbers of thirtysomethings still living with their parents is stubbornly high in countries such as Italy and Spain, with grave implications for birthrates and family formation in places whose demographics are already badly skewed towards elderly people.

“We’ve never had, since the dawn of capitalism really, this situation of a population that is ageing so much and in some countries also shrinking, and we just don’t know whether we can continue growing the economy in the same way we once have,” said Prof Diane Coyle, an economist and former UK Treasury adviser.