He speaks languages, knows about diplomacy from his one-time Eurocrat father and is culturally sensitive in a way that eludes many British Islanders. Unlike David Miliband, who appeared supercilious, Boris can save situations with humour and self-deprecation Depending on who tells it, gasps, shudders or dismissive laughter spread through the ornate Locarno rooms at the Foreign Office as the news broke. The news, of course, being that one of the first Cabinet appointments announced by the new Prime Minister was that of Boris Johnson to be foreign secretary and, as such, the country’s chief diplomat. Diplomat? you might splutter; the buffoon who brought us the racial slight on the President of the United States, who has used words like “piccaninnies” in print and who felled a Japanese child while trying to join in a rugby game? Boris, chief UK diplomat? Harrumph, harrumph.

Well, let’s take a closer look. Boris may have the title of foreign secretary and chief diplomat, but he will have rather less of the world to play with than his immediate predecessors did. The EU (Brexit) brief is being removed – quite rightly – from the post-referendum Foreign Office. Boris will be free to consider Europe and the UK’s regional interest in the context of the wider world, but the most significant diplomatic job in the new government – overseeing the minutiae of the EU negotiations and determining the shape of the post- Brexit settlement – will not be his.

With May’s creation of a trade department – under Liam Fox – Boris Johnson’s brief will also be shorn of the commercial mission that Cameron and Osborne tried to force up the agenda of (sometimes unwilling) UK ambassadors. A large slice of the China file will thus lie outside his remit. 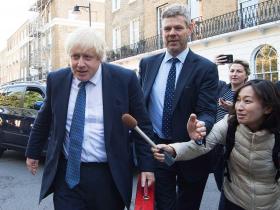 What is left is not nothing. To Johnson’s rest-of -the-world portfolio will belong the United States in the throes of its election campaign, with a possible Donald Trump presidency on the horizon. There will be geo-political China, on the rise, but perilously so; there will be India; the rest of the Commonwealth; the rest of Asia; Latin America, and Russia – all offering opportunities as well as hazards to the interests of the UK as it sets about extricating itself from the EU.

The substance of the job will shift, too. Without the trade emphasis, it will be more about cultivating bilateral relations and keeping the UK in the run-up to Brexit on the international map – traditional representational stuff. Which could play to Boris’s strengths. His profile abroad is already sky high, thanks not only to his talent for self-promotion, but to his two terms as mayor of a global city and the still-remembered success of the London Olympics. Capitalising on Boris’s exceptional profile for the national good is an inspired move – if it works.

And it might work. Boris Johnson has an international background. He speaks languages, knows about diplomacy from his one-time Eurocrat father and is culturally sensitive in a way that eludes many British Islanders. Unlike David Miliband, who appeared supercilious, Boris can save situations with humour and self-deprecation. He has no need of the stardust that William Hague tried to borrow from Angelina Jolie. He is enviably well-read, possesses the journalist’s knack of separating wood from trees, and seeks to be a polymath more typical of another age. When the European Commission President, Jean-Claude Juncker, described him last week as “part of a group of retro-nationalists, not patriots”, he intended to scold. But it is why Boris could be well suited to being foreign secretary for Brexit Britain.