As a testimony to its extraordinary history, the Naples region hosts an unparalleled concentration of UNESCO World Heritage sites: the Center of Naples itself; the Roman archaeological sites of Pompeii, Herculaneum and many more.

The city was founded in the 8th century BC as Parthenope, by Greek settlers from the nearby city of Cumae, itself founded by Greeks from the island of Evvia, in the area between Monte Echia and the island of Megaride, on a previous 2nd millennium BC settlement named Phaleros, a name connected to one of the Argonauts. The Cumaeans founded Neapolis (“New City”) at the area of today’s Piazza Municipio in 6th century BC, and the town became one of the most important Greek polis of Magna Grecia and the whole Mediterranean Sea. 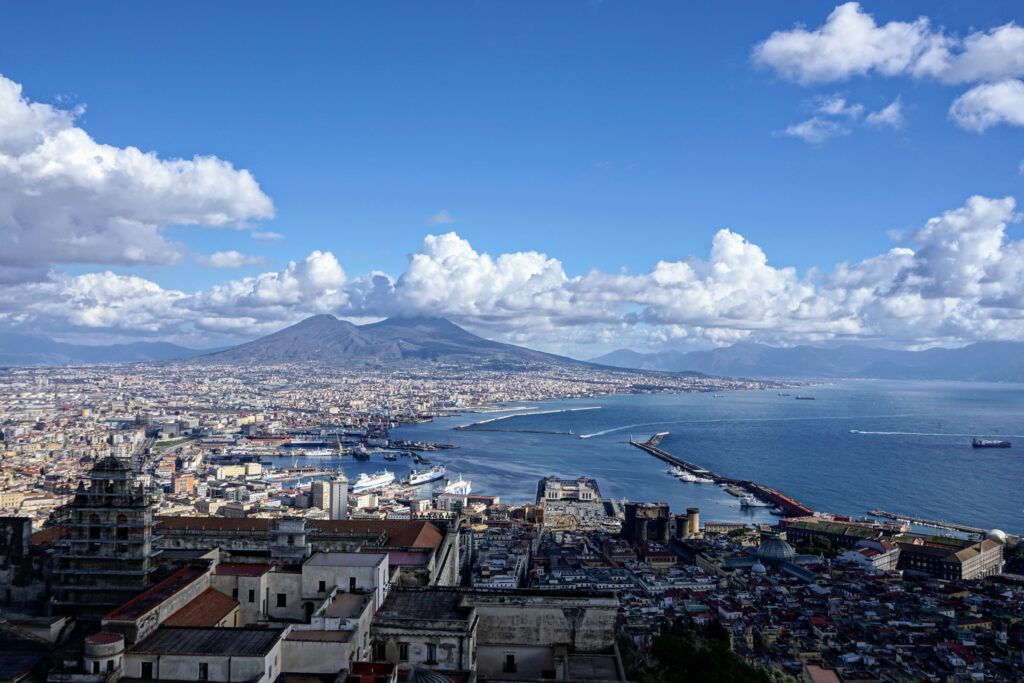 Naples was later governed by Normans, Swabians and Angevins, who made it a capital; the King of Sicily became King of Naples after the Sicilian Vespers. During the first half of 17th century, Naples was one of the main centers of the Spanish monarchy, and the most populated city in Europe, with more than 400,000 inhabitants.

Naples has vibrant markets and many small shops that sell everything from clothes to household appliances at prices much lower than in most of Western Europe.

After tragic events, like an eruption of Mount Vesuvius in 1630, the revolt of Masaniello in 1647 against the Spanish government, and the plague that killed half of the population in 1656, Naples reached a glorious period under the government of the House of Bourbon, that made it one of the most relevant cities in the continent about culture, economy and politics. Following the French and Napoleonic invasions, the Kingdom of the Two Sicilies was established in 1815, restoring the Bourbon dominance over Southern Italy and Sicily and making Naples the third most relevant city in Europe and the first one in present Italy for inhabitants and economy.

The annexation of the Two Sicilies to the newborn Kingdom of Italy in 1861 spelled, in fact, the beginning of a long period of decline for Naples and all Southern Italy. The town suffered the heavy bombings of World War II, that left deep scars in its monumental heritage, but succeeded in kicking out the German occupiers during the revolt known as “the four days of Naples”.

Naples is becoming increasingly popular with a younger generation of Italians and foreigners who flood into the city and lend renewed vitality to its nightlife.

Traffic in Naples can be extremely heavy, similar to that of other big cities like Paris and New York. Extensive excavation works are ongoing to complete some metro segments, adding further to traffic in some areas. A typical example is the train station area, which is undergoing a complete makeover (a model of how it will look is observable in the interior of Stazione Centrale), plus the excavation of a metro line connecting it with Capodichino Airport. Another example is Piazza Nicola Amore (commonly known as Piazza Quattro Palazzi because of the four twin buildings surrounding it), where metro line excavations revealed an ancient Roman temple, whose structure will be integrated in the futuristic station designed by the world-class architect Renzo Piano.

Normal traffic regulations are generally observed in Naples; however, it is prudent to follow the locals when crossing the street. Since pedestrians often cross the street in the middle of the block, Neapolitan drivers are very attentive, and accidents are very rare. Remember to always look left (and not right) for incoming cars or motorbikes, since circulation follows European standards.

Naples has vibrant markets and many small shops that sell everything from clothes to household appliances at prices much lower than in most of Western Europe. Especially to be seen is the Porta Nolana, Pignasecca and the Vasto markets, which also give a grasp of popular Neapolitan life. Don’t miss the impromptu fish market which happens especially on Sunday morning at Rotonda Diaz, the central square of Via Caracciolo. Small fishing boats come ashore, and directly sell fresh and often alive fish and octopuses, a very characteristic and joyful scene of Naples’ life.

Many songs are dedicated to Naples. One of them is the popular song by Dean Martin called In Napoli.

Naples is becoming increasingly popular with a younger generation of Italians and foreigners who flood into the city and lend renewed vitality to its nightlife. The hippest scene is around the bars and cafes on Piazza Bellini, Piazza Santa Maria la Nova and Piazza San Domenico Maggiore, becoming busy after 23:00. Also, Piazza San Pasquale and Mergellina are typical places for the local movida. If you want to venture to the outskirts of the city, there are many bars and clubs near the port and boardwalk of Pozzuoli.

While Neapolitans (and Vigili Urbani, the town’s local police) are largely tolerant to youngsters drinking, having fun and making noise, even at late hours, getting drunk and causing damage or littering is not tolerated.
Campanian wine has become famous worldwide in the last decade or so, and delicious naturally lightly carbonated mineral water with minerals from Vesuvius is available and worth searching out.

Many songs are dedicated to Naples. One of them is the popular song by Dean Martin called In Napoli. It is also interesting that Naples is twinned with Serbian city of Kragujevac, as well as with Athens, Greece and Sarajevo, Bosnia and Hercegovina.