In 2021, Malaysia was the 24th largest trading nation in the world and global exporter, while being the 26th biggest global importer.

IMF in their Economic Outlook as of April 2022 positioned Malaysia as the 34th largest economy in the world with the GDP size of USD 439.37 billion, which put the country of more than 33 million people as the third largest economies in the Southeast Asia region behind Indonesia and Thailand.

In 2021, Malaysia was the 24th largest trading nation in the world and global exporter, while being the 26th biggest global importer. Electrical & electronic components (E&Es), petroleum and machineries are the top Malaysian exports, along with palm oil, which Malaysia is one of the major global suppliers. 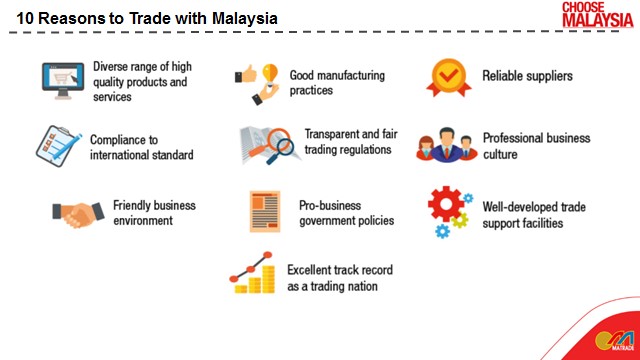 Malaysia is the world’s largest exporter of more than thirty particular products that range from high technology equipment and components, consumables to derivatives from high value commodities such as petroleum and palm oil.

There are many reasons as to why Malaysia is Serbia’s strategic trading partner. As a starter, Malaysia is strategically located in Asia, along the Straits of Malacca, one of the most important shipping lines in the world connecting Indian Ocean and Pacific Ocean. Malaysia also offers a very friendly business environment where the country ranked 12th in the World Bank’s Ease of Doing Business Index 2020. Being a trading nation at its core also made Malaysian industries meet the compliances of international standards where the Government of Malaysia is very supportive with pro-business policies. 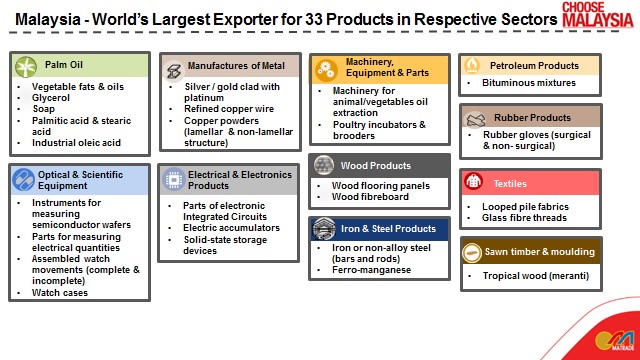 Apart from offering diverse range of high quality products and services, Malaysia also is well-known for its good manufacturing practices (GMP), where several GMP standards have been made the requirement standards by the Government of Malaysin to elevate the quality of locally-made products.

Having a mixed economy system which includes variety of private freedom, Malaysia is considered by many as one of attractive gateways to number of markets. English is widely spoken and the country is part of several trade pacts either multilateral or bilateral that foreign companies can leverage upon. As of date, Malaysia has Free Trade Agreement (FTA) with Australia, Chile, India, Japan, New Zealand, Pakistan and Turkey.

As a member of the Association of Southeast Asian Nations (ASEAN), Malaysia also is part of the regional FTAs with China, Japan, Republic of Korea, India, Australia and New Zealand. On March 18th, 2022, Malaysia has entered into the Regional Comprehensive Economic Partnership (RCEP), the largest trade pact in history.

Having a mixed economy system which includes variety of private freedom, Malaysia is considered by many as one of attractive gateways to number of markets

Malaysia is one of the founding members of ASEAN, a political and economic union consists of 10 member states in the Southeast Asia region. From the Kuala Lumpur International Airport (KLIA), Malaysia is within 2 to 3 hours air journey to all of the business capitals in ASEAN and this is one of the advantages that make Malaysia an attractive destination among foreign investors. Last year, InterNations, a Germany-based firm that focus on global expat network, named the capital of Malaysia, Kuala Lumpur as the best city for expats in their Expat City Ranking 2021 report.

Malaysia External Trade Development Corporation or MATRADE is Malaysia’s national trade promotion agency under the Ministry of International Trade and Industry (MITI). MATRADE plays a major role in connecting, facilitating and assisting foreign companies to do business with Malaysia. MATRADE is tasked to promote Malaysian products and services overseas through its 46 global offices.

Serbia’s market is under the purview of MATRADE Office in Milan, Italy (milan@matrade.gov.my)
Please visit our website, www.matrade.gov.my