How did the innkeeper’s son from Bucharest build the most beautiful hotel on the Cote d’Azur? Why it is not a problem to ridicule politicians at the Nice Carnival in Nice, the fourth largest carnival in the world? Who built the largest Russian Orthodox Church outside Russia?

Our first attempt to travel to Nice earlier this year failed because my older daughter tested positive for COVID. Here we are, a month and a half later, again on our way to Budapest from where we will fly with WizzAir to Nice. We are again encountering a problem called ‘the Hungarian customs officers’, whom I wrote about a couple of months ago in an article about Budapest. This time around, we waited for more than two hours to cross the border and were almost late for the flight.

Once you board a plane from one country to another in the Schengen area, like France, no one asks to see your passport, let alone proof of vaccination and negative PCR tests, which we have properly prepared. Nice Airport is barely ten minutes away from our hotel on La Promenade des Anglais. As we walk towards the restaurant in the old part of the city, a carnival procession passes by us – the famous Carnival is underway, the fourth largest in the world (after Rio, Venice and New Orleans).

We are watching how numerous political and public figures in today’s France are parodied, including French President Emanuel Macron himself. I saw similar scenes at the Rijeka Carnival exactly two years ago, on the eve of the pandemic. At that time, the mayor of Rijeka, Vojko Obersnel, was walking around dressed as a woman – Jovanka Broz. Both times I thought about how far behind we are about all this and how much our politicians are more like the 19th than the 21st century.

By the way, the Carnival in Nice was first mentioned in the Middle Ages, in 1294. In the 19th century, the local artist Alexis Mossa founded the Carnival Committee, which has been regularly managing this event ever since. Every year, over a million tourists, come to Nice on this occasion. Parades are held in the evening, while “Battle of Flowers” is organized during the day.

The next day, after a hearty breakfast, I went to the nearest bicycle rental shop and set off to tour the city on two wheels. My first point is the Russian Orthodox Church in Nice – the largest Orthodox church in Western Europe. Under the patronage of Tsar Nicholas II, the building was designed by M.T. Preobrazhensky. It was opened in 1912 after one year of construction.

As soon as the railway arrived in the town, the then Russian Tsar Alexander II arrived in Nice by train in 1864. The monument erected in honour of his son Nikolai, who died young at the age of 22, adorns the garden behind the Cathedral of St. Nicholas in Nice.

The Tsar was delighted with the local climate with ‘the romance’ between the Russians and the French Riviera lasting to this very day – from the Romanovs and their courtiers, princes and boyars to new Russian billionaires like Andrei Melnichenko and others. Thousands of Russians came here occasionally or permanently settled in Nice, Cannes, Monaco, Menton and neighbouring San Remo in Italy, where I saw a beautiful Russian church ten years ago. The magnificent iconostasis in the church was made by the famous Hlebnjikov Workshop.

A copy of the Statue of Liberty was placed on the Quay of the United States of America in 2014, opposite the Opera House. In the location of today’s Cote d’Azur Opera, the first old Wooden Theatre was built in 1776. The building was sold in 1787 and three years later it was reopened as the Royal Theatre.

“In 1826, under the patronage of King Charles Felix, the town of Nice bought the old theatre building, demolished it and in two years built a new, emblematic building”

In 1856, a great ball was held here in honour of King Victor Emmanuel II (until 1860, Nice was part of the Italian Kingdom of Sardinia under the Savoy dynasty).

On Wednesday, March 23, 1881, during the performance of the opera Lucia di Lammermoor, a gas leak caused a tragic fire and the building burned to the ground. Today’s Opera House was opened in 1885 accompanied by Verdi’s Aida.

La Promenade des Anglais, not far from the copy of the Statue of Liberty, there is an obelisk called “Neuf Lignes Obliques” (“Nine Oblique Lines”), which was erected in 2011, to mark the 150th anniversary of the Treaty of Turin from 1860 when Nice, which had been prior part of the Kingdom of Sardinia, was handed over to France.

By the way, La Promenade des Anglais (The English Promenade) got its name from the fact that, in the early 19th century, many British aristocrats spent a lot of time in Nice, enjoying the perfect climate here. In 1830, the British proposed to build a promenade by the sea.

La Promenade des Anglais was the scene of a tragic terrorist attack on July 14, 2016, when during the celebration of the French national holiday Bastille Day, an Islamic terrorist driving a 19-tonne truck killed 84 people and wounded 458.

“Sacha Sosno Park was named after the famous French sculptor of Estonian origin, whose widow Masha donated a large number of the artist’s sculptures to the City of Nice three years after his death”

The park features the giant Square Head, a sculpture that houses the city library and was made in honour of the famous sculptor.

Every time, on such occasions, I wonder why there are no sculptures of contemporary art in our cities (the honourable exception is the great sculpture of Mrdjan Bajić on the walkway near Belgrade’s Beton Hala). Rather, we have statues in banal realism style erected in honour of Jaša Tomić, Laza Kostić, Mihajlo Pupin, King Peter the Great and Kosta Hadžija in Novi Sad or Nicholas Romanov in Belgrade. 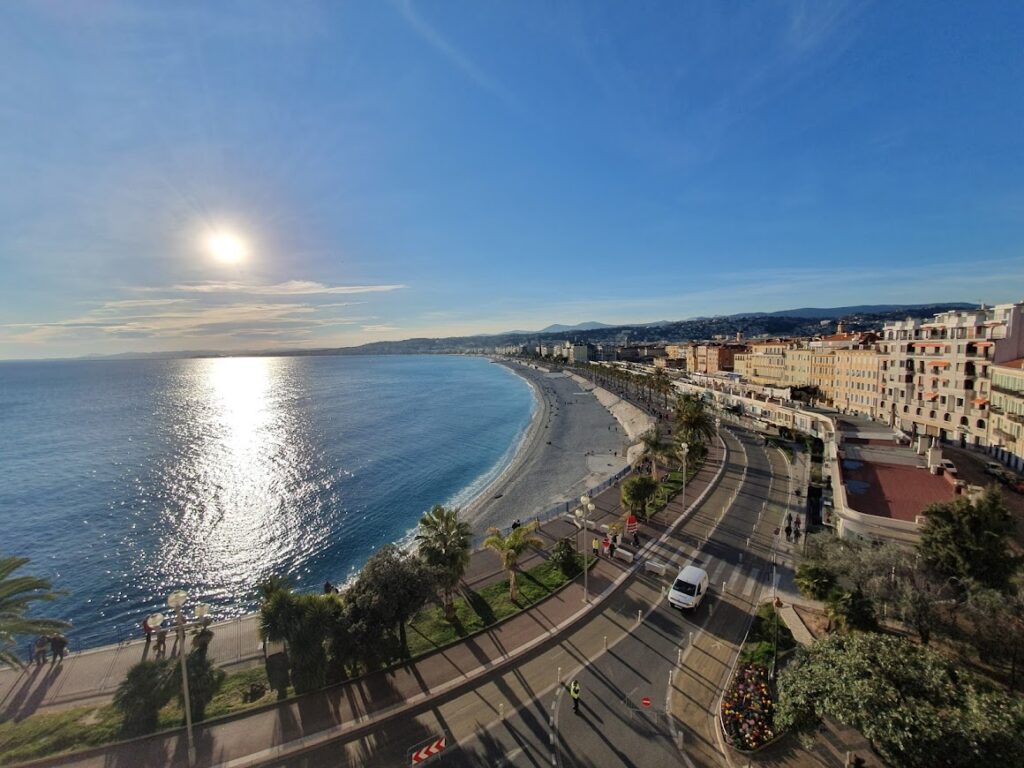 The monument to the victims of the First World War is located on the seashore, right next to the old port. It was inaugurated in 1929 by Marshal Ferdinand Foch. The monument is 32 metres high, which makes it one of the tallest in the country. It contains plaques with the names of 3,665 citizens of Nice who died in the First World War. On the side, there are pillars dedicated to the branches of the French army (navy, infantry, aviation, artillery). Later, memorials in honour of the victims of the Second World War 1940-1945 were added.

“In the park that surrounds Villa Massena, on La Promenade des Anglais, next to the Negresco Hotel, there is a memorial dedicated to the victims of the July 14, 2016, terrorist attack”

On that day, a mass of people celebrating the French national holiday, Bastille Day, was under attack. Tunisian Mohamed Bouhlel deliberately crashed a truck into a crowd on La Promenade des Anglais. Immediately after that, he started shooting people and killing 84. At first, the shooting was mistaken for fireworks, so people did not react immediately. The driver was driving at a high speed of over 100 metres when he hit a crowd of spectators. He was eventually killed by police.

The scene of this gruesome attack now features photographs, mostly of young people, men, women, of different faiths and races, including several Tunisians, who were killed here, as a testimony to the madness of terrorists.

From the Bellanda Fortress on the hill above Nice has a great view of the city and the sea. It was built in 1825 on the site of earlier fortifications, at a time when Nice still belonged to the Italians, i.e. the Kingdom of Sardinia.

Apparently, Emperor Napoleon III came to the town as soon as Nice was returned to France, climbed Bellanda and said: “This is the most beautiful view I have ever seen!”

People buried in the cemetery on the hill have the same view. Right next to the Catholic Church, there is a beautiful Jewish cemetery on the hill. The first synagogue in Nice was built in 1418. Both cemeteries were built on this site when Napoleon forbade burials in churches and synagogues in the late 18th century.

Henri Negresco, the son of a Romanian innkeeper, left Bucharest when he was 25, and went to Paris and then to the French Riviera. As the director of the casino in Nice, he realized that the city needed a luxury hotel that would accommodate elite clientele. The Negresco Hotel was opened in 1913 on the eve of the First World War. It is said that the chandelier containing 16,309 crystals was ordered from the famous company Baccarat with the help of Emperor Nicholas III, but the delivery was prevented by the October Revolution.

During the First World War, the hotel was turned into a hospital and Negresco went bankrupt after the war. He was forced to sell the building to a Belgian company and soon died in Paris at the age of 52.

The hotel and its fame have outlived him by more than a hundred years. During the terrorist attack on the English Promenade in Nice on July 14, 2016, the hotel lobby served to triage the injured.

109 years since its grand opening, the Negresco Hotel is synonymous with elegance and luxury and a monument to the short-lived French dream of the young Romanian.