Masters of Improvisation – The Janoschka Ensemble – To Perform At the Opening of Regional ArtLink Festival in Belgrade Fortress / Open Air Scene by the Statue of Victor/ 25th of June 2022 from 19:30

Janoschka Ensemble of Slovakia to perform at the opening of the ArtLink Festival, that is to feature some of the leading global stars of classical music at select multiple locations of historical importance throughout the summer; a majority of performances to be staged in pristine natural surroundings – in the quest to articulate the importance of audience involvement in daily encounters with artistic expression.

The Janoschka Ensemble, hailed by international press and dignitaries from the global musical scene as “masters of improvisation” in the domain of classical music and fusion/crossover of genres – are announced to perform at the opening of the leading regional festival of classical music and accompanying socially-engaged programs ArtLink FESTIVAL – on June 25th at the Open Air Scene by the Statue of the Victor in Belgrade, starting at 19:30h.

The Janoschka Ensemble consists of brothers Ondrej and Roman on violins – and Frantisek on piano, accompanied by their brother-in-law Julius Darvas.

The official themes of the festival – “Sound of Water” and “Artists For Nature In Festival Cities” – indicate that the festival performances will be staged in some of the most iconic, picturesque and historically important locations in our Region, highlighting the importance of intrinsic sustainability and renewability of river flows and monumental heritage. To this end, ArtLink Festival expresses its gratitude for the invaluable support provided by its Official Partner UNIQA Insurance, as well as ZEPTER, Srbija Vode, the City of Belgrade, West Balkans Fund, the European Union and diverse local partners.

“The Janoshka Ensemble is one of the most original groups of exceptionally talented musicians, that are unique in their performance of classical music, jazz, Latino and other genres. Their inspiration is ceaseless, and deserves the attention and enthusiasm of all”, were the words of praise by one of the most celebrated composers of film music in Hollywood, Lalo Schifrin. Along with him, their creative opus has received accolades from the likes of Anna Netrebko, Al Jarreau, Bobby McFerrin, Juan Diego Flores, Brian Mc Knight, Julian Rachlin, Randy Newman, Birelli Lagrene…

Following up on the performance of Janoschka Ensemble at the Open Air Scene by the Statue of the Victor, the Summer Stage of Nebojša Tower will feature the esteemed pianists Adi Neuhaus from Israel on June 27th at 19:30h and on June 30th Luis Agius from Portugal – starting at the same time. Adi Neuhaus will also be performing for the audience in Novi Sad, in the New Concert Hall, on June 28th at 19:30h, while the Ram Fortress will be hosting a performance in honour of the International Day of the River Danube on June 29th from 19:30h, featuring Fedor Rudin (violin), Jan Vogler (violoncello) and Camerata Balcanica.

The diverse and culturally rich program of the ArtLink Festival continues across the region and throughout the summer as per the schedule shown below. The ArtLink Festival is a unique concept that encompasses activities of the West Balkans Festival Hub on behalf of the European Festival Association (EFA) and within the EFFE Label project – featuring eminent performances and engaging cultural activities that bring peoples, cultures and traditions together. 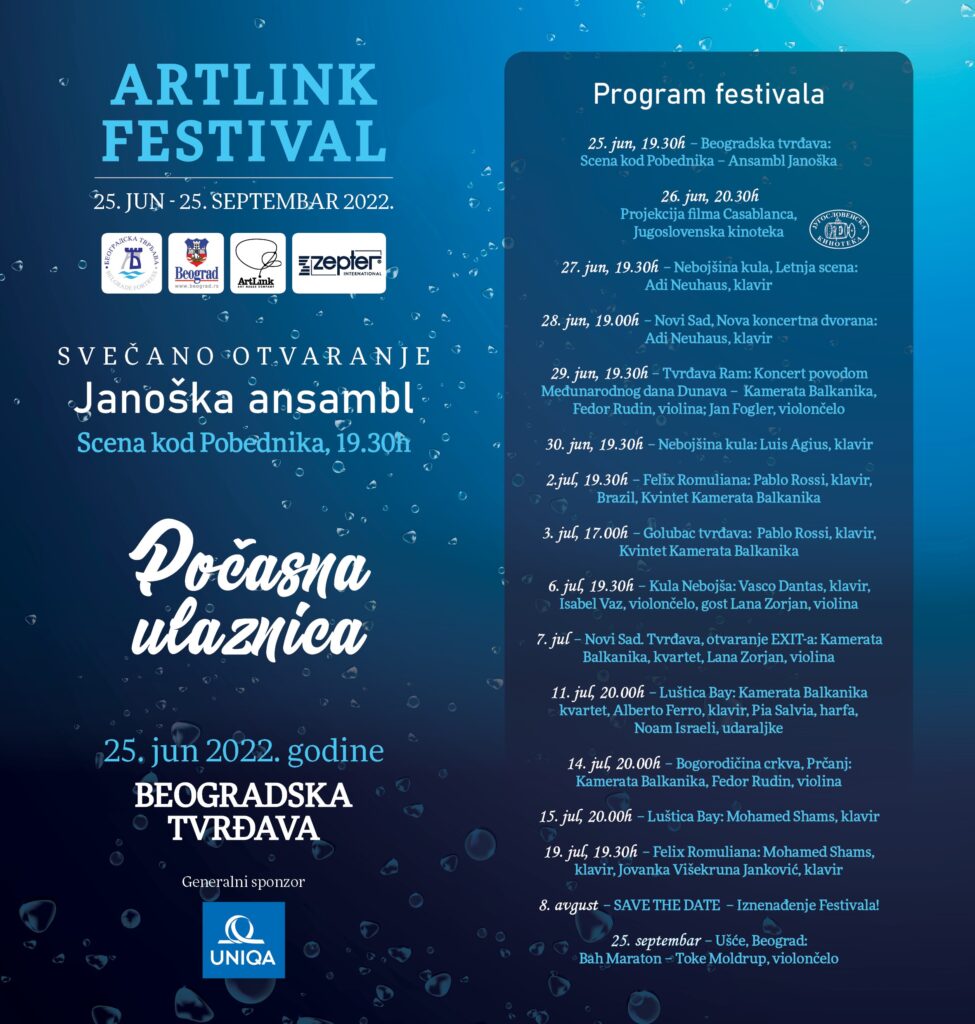 Become a member and follow all the latest news on the Festival at the Official Viber Channel of ArtLink Festival https://vb.me/artlink22