In a country where a guest is considered as a gift from God, it’s no surprise that Georgian food is a generous reflection of the extreme hospitality of the people

Influenced by neighbors, invaders, and its religious customs, Georgian cuisine is one of the most intriguing and appealing in the World. Mrs. Gvantsa Kesheleva, Georgian diplomat, spouse of the Charge d’Affaires of Georgia to Serbia, Mr. Ilia Koberdize, spoke about the national cuisine of Georgia, her life in Belgrade, and she share with us one of the most interesting Georgian recipes.

What is the secret ingredient to the success of Georgian cuisine worldwide?

Georgian cuisine reflects the dramatic past of the country. By geographical and political design, Georgia has absorbed neighboring culinary influences over the centuries, yet its identity remains intact. This is the secret to the uniqueness of Georgian cuisine. Throughout history, my country has been a territory of interest to many foreign countries, mostly due to its strategic location between the Black Sea, the Caucasus Mountains, and the Caspian Sea, also part of the Silk Road. Georgia was invaded by many, all bringing their influences to the Georgian table and creating a unique and exciting cuisine unlike any other.

At the same time, as part of the Silk Road, for centuries, Georgia served as a stop on East-West trade routes. As traders passed through, Georgians borrowed and assimilated the flavors and aromas of visitors’ culinary traditions. Georgian dishes now incorporate flavors and influences from the foods of Iran, Turkey, Asia, and the Mediterranean.

Food plays a very important role in Georgian identity. In a country where a guest is considered as a „gift from God“, it’s no surprise that Georgian food is a generous reflection of the extreme hospitality of the people. Nowhere is this felt more than at the Supra – a traditional Georgian feast, which is a social event and a kind of a ritual with a special set of rules of behavior.

Perhaps the most essential element of the Supra is the presence of a Tamada, or a toastmaster and the most respectable man at the Supra who leads the process and proposes toasts. A good Tamada is considered one who is eloquent, intelligent, smart, sharp−witted with a good sense of humor. A toast can be proposed only by a Tamada; the rest is to develop the idea. Georgians are deep believers. 85% of the population is Orthodox Christian, therefore, the first toast at any traditional Supra is proposed as “For the Glory of the God.”

The Georgian Supra has been granted National intangible cultural heritage status. To preserve and promote the universal importance, uniqueness, and traditions of the Georgian feast, the  Government of Georgia has presented Georgian Supra to be enlisted into the UNESCO Intangible Cultural Heritage list.

Speaking of food: What do you miss the most from your country? Can you find all the necessary ingredients for preparing traditional Georgian dishes in Serbia?

Georgian cuisine is a cradle of gastronomic diversity. It is all about herbs and spices. Georgia has the ideal climate to produce a great variety of culinary herbs – including tarragon or tarkhuna (in the Georgian language) which I miss the most in Serbia. This herb is used in meat dishes, as well as soups and vegetables, pastries, and even drinks. We make a carbonated soft drink from tarragon leaves. The drink is known for its typically distinctive green color and is especially popular among foreign visitors.

For foreigners, Georgian cuisine is mostly associated with Khachapuri – a cheese-filled bread or Khinkali – meat-stuffed dumplings. However, Georgian gastro culture can offer a wide range of mouthwatering traditional courses. One of them is Chakapuli – lamb and tarragon stew. An aromatic dish made from a young lamb and the first spring herbs, symbolizes the arrival of spring. It is usually prepared between May and mid-summer when cilantro, parsley, tarragon, spring onion, and mint are in season and the wild plum berries have not yet fully ripened. The dish is comprised of delicate, melt-in-your-mouth chunks of meat and finely chopped herbs stewed in a sauce of hot pepper and dry white wine. Chakapulii is traditionally served at the Easter table –  the most important Orthodox church holiday in Georgia.

And of course I miss Georgian wine. Local cuisine is not complete without Georgian wine. Wine always complements the delicate flavors of the food and infuses even more life into each aroma. In 2017 Georgia was officially recognised as the birthplace of wine with 8 000 years of wine-making traditions by UNESCO, thus enlisting the Georgian clay wine-making method into the UNESCO intangible cultural heritage list. Currently, almost 500 sorts of grapes grow on Georgian soil, which makes my country the most diverse country in the wine-producing business.

What do you think about Serbian cuisine and what is your favourite Serbian dish? Are there any similarities with Georgian cuisine?

Serbian cuisine just like Georgian is characterized by the influences of many foreign countries because of its geopolitically strategic location. Our cuisines share many similarities also because of the same religious belief. The use of meat, dough, and vegetables is predominant in both cuisines. Although, for Georgian taste, I miss more herbs and spices in Serbian dishes.

Bread plays a very important role in Serbian and Georgian cultures. It is often treated almost ritually. For example, a traditional Serbian welcoming is to offer the guest bread and salt. Just like in Georgia. It is an unwritten rule to offer a bread basket to the guests at any Georgian table regardless of its formality. Bread also plays an essential role in Orthodox religious rituals. For example, many people in both countries believe that it is sinful to throw away bread regardless of how old it is.

Serbian specialties offer a wide range of choices. It is very hard to single out any of them. However, for my taste roasted peppers filled with kajmak is just perfect. Vanilice is an excellent combination with centuries-old coffee-drinking Serbian tradition.

How is your life in Belgrade? Did you visit some other places in Serbia and what would you recommend to your friends to see here?

Belgrade is all about relationships. It is a very vibrant, vivid and extremely comfortable city to live in. Its architecture is immensely varied  – a perfect reflection of countries‘ development stages throughout the centuries. I love wandering around the city discovering hidden places, especially in the narrow streets of historical areas such as Dorcol and Vracar, and enjoying the preserved works of Serbian, German, Italian, and Czech architects who contributed to raising a new Serbian Belgrade in the 19th century. Kalenić Green Market is a perfect place to wander inside, especially during weekends, and please yourself with the smell of freshly baked bread and colorful vegetables.

I was blessed to have been able to travel around the country. From a professional perspective, the Chapel of the Virgin Mary of Peace, or simply a Chapel of Peace is of utmost interest to me. This is the place where one of the most important events associated with diplomatic relations between European countries and the Ottoman Empire – the signing of the Karlovci Peace treaty took place. However, Golubac Fortress still remains one of the top attractions with its tumultuous history.

It is very easy to fall in love with Serbia. For that, you do not need to discover unknown sites or explore the most attractive places in the country. The people of Serbia will make you love their Motherland as you will never be willing to live anywhere else.

While lamb Chakapuli is the most traditional you can also make this dish with veal. 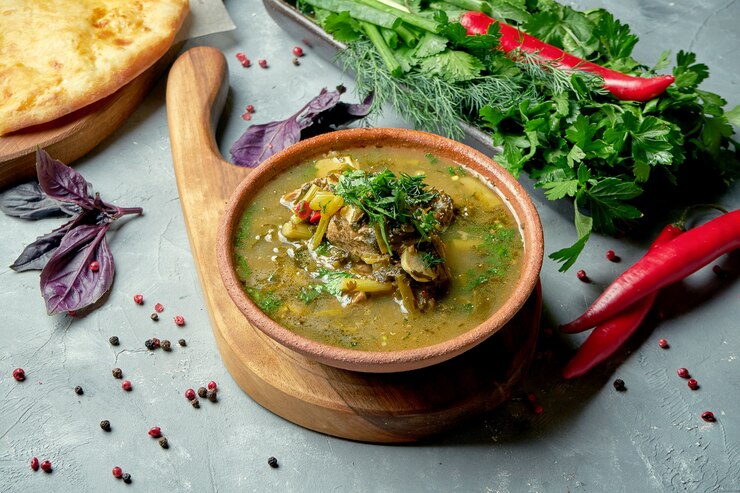 Chop the meat in medium sizes. Chop herbs and green chile pepper. Mix them all together and place them in a separate bowl. Place the meat in a medium-wide pot in one layer. Add a third of the mixed herbs. Add another layer of meat and then herbs again. Repeat the process three times making three layers of meat and mixed herbs. Season with salt, black pepper, and chili flakes. Drizzle the wine and cover. Let it cook over medium-low heat for 45 to 50 minutes until the meat is tender. Taste and adjust the seasonings.

Chakapuli is served hot and complemented with a glass of white dry wine.