Pharmaceutical company Galenika has organized nationwide research about the medical conditions and usage of medications in Serbia. This particular research has been realized with the aim of seeing how the population is changing after or rather because of the pandemic. Habits and needs of the citizens of Serbia are changing, and awareness about the importance of preventing illnesses and the need to combat health risks and challenges is evident.

“Galenika, as a pharmaceutical company, is data-driven to a high extent. Knowledge is precious and compliments our efforts in making an impact on society, as well as for our product portfolio expansion towards relevant, high-quality products optimized for the actual needs of consumers. The results are valuable; they tell us that usage of medications in Serbia is consistent with the countries in the region where we have conducted the research. The results are illustrative of the time we live in and point towards the need for awareness raising and active support in prevention”, said Ricardo Vian Marques, General Manager of Galenika.

Home Pharmacies and OTC products that are most common in home pharmacies in Serbia include tablets, capsules, ointments and gels for common health problems and illnesses (according to the majority of 84% of respondents). People most often have OTCs for analgesic (75%) and antipyretic problems (72%) in their home pharmacies. Sore throat, cough and cold are also pretty common, and  69% of people keep products for treating them. Anti-allergy products show global growth in usage, while 41% of the respondents in Serbia also point out that their home pharmacies include these medications. Allergies are globally on the rise and show that 10% of the world population suffers from some kind of allergy.

The most common acute problems are headaches and back and limb pain (84%). Also important are respiratory infections (72% of the people have respiratory infections with or without fever at least once a year, 44% up to 3 times per year and 28% – 4 or more times per year. Gastrointestinal problems account for 56% of the respondents who have at least one episode per year.

Tranquillizers are present in about 1/3 of the population, and drugs for easier digestion. Both of these point towards a modern lifestyle with stress and eating habits which require support.

people use anti-stress drugs on (at least) a monthly basis (whereas 13% say they use them weekly).

Since January 2020 two thirds of the respondents have used antibiotics. On average, people have taken 2.8 packs of antibiotics since the onset of the pandemic. 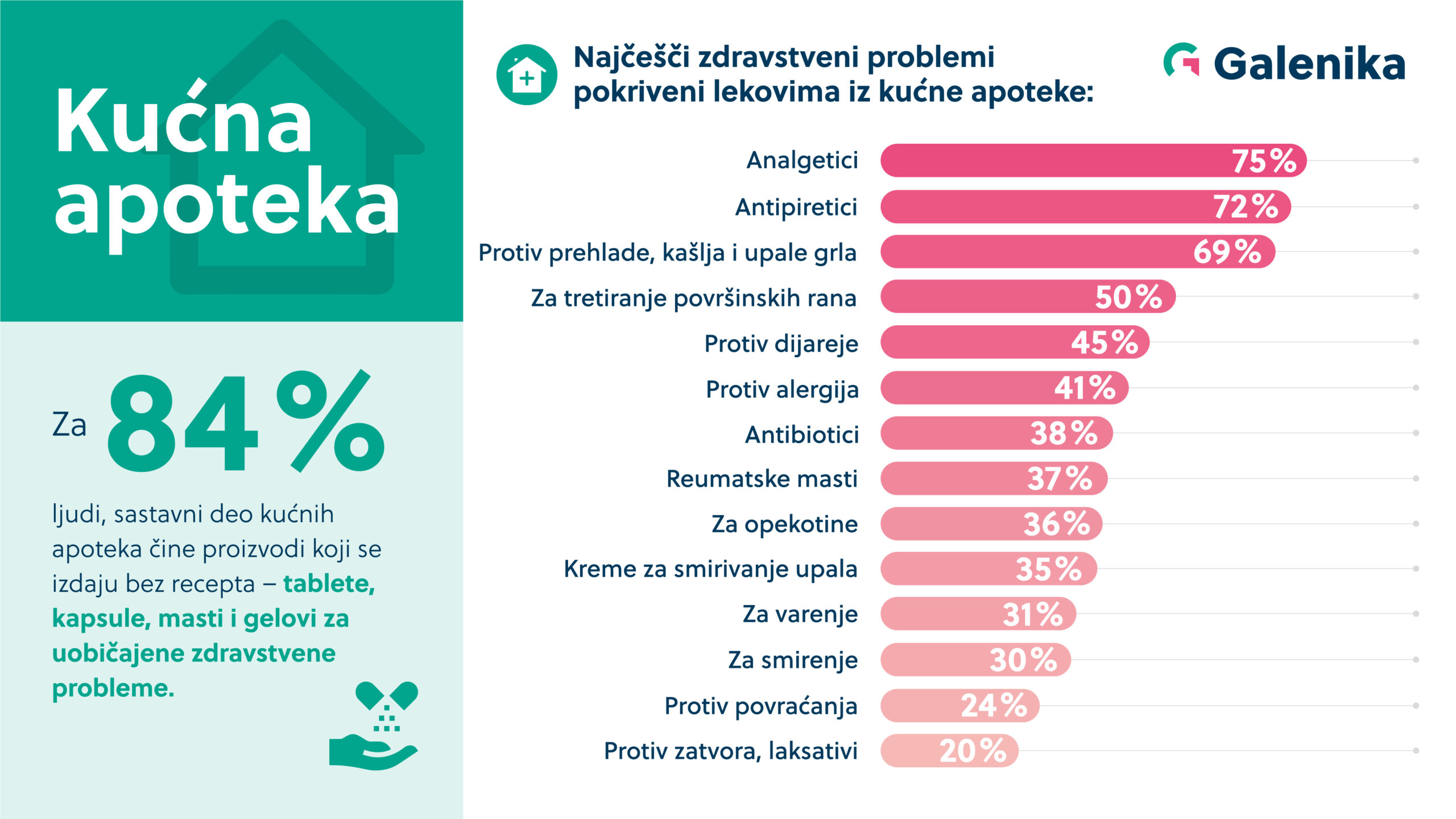 About 2/5 (41%) of the respondents report a chronic condition that is treated with medications. Allergies are high, as well as metabolic/endocrine and pain-related conditions.

It is safe to assume that the percentage of the population suffering from neuro-psychiatric /mental disorders and neurological problems is higher, based on the actual consumption of these medications in the market. However, these health issues still represent a stigma in our society.

Among the respondents who use continuous therapies, significant mentions include Thyroid gland and lung problems, too (each account for 5.33%).

On average, Serbs with chronic conditions use 3.5 different drugs to treat them. 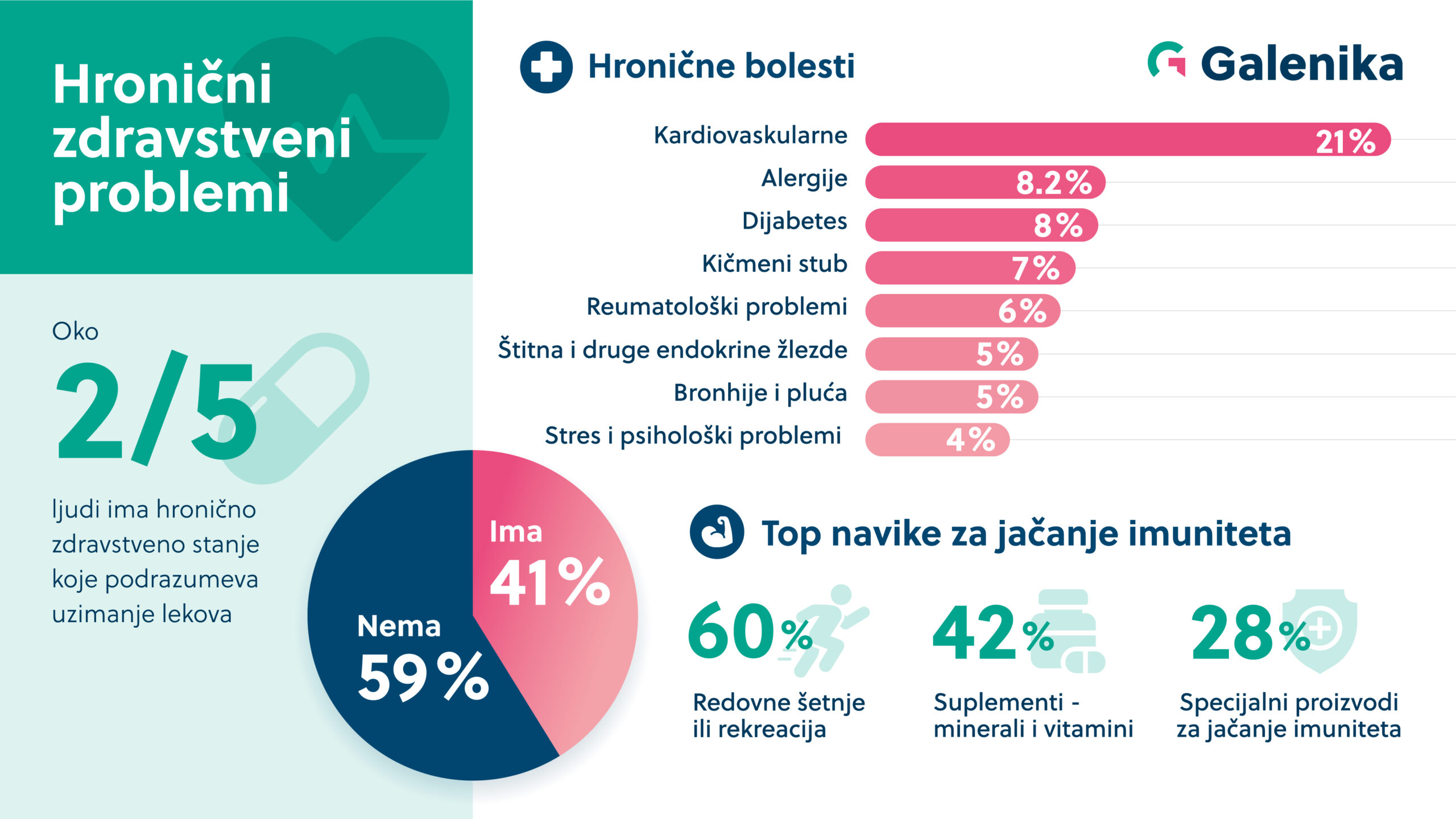 About two-thirds of people consume products they believe are helpful to their immunity. Immunity boosting is a concept that is becoming stronger among Serbs. It is important to point out that awareness about the benefits of physical activity is growing. Regular walks and recreation have significant supporters (1/2 of people take walks, and 1/3 go for some recreation), but there is room for improvement.

From immunity-boosting supplements, vitamins and minerals are preferred. Usually, people take vitamins and minerals on a seasonal basis or when they want to protect themselves, and most often, it is up to three products. Primarily doctors’ and pharmacists’ advice most frequently guides people’s product decisions.

Three-quarters of people value pharmacist advice when purchasing pharmaceutical products. 50% of people always turn to doctors when they have health problems, while 38% go to doctors for bigger problems otherwise, they rely on pharmacists’ advice.

Around half of people research their symptoms online, and the same percentage take medicines on their own initiative.

The data collection of the research was conducted for Galenika by IPSOS in September-October 2022 across Serbia, in urban and rural areas, among the population 18-70 years of age, men and women. 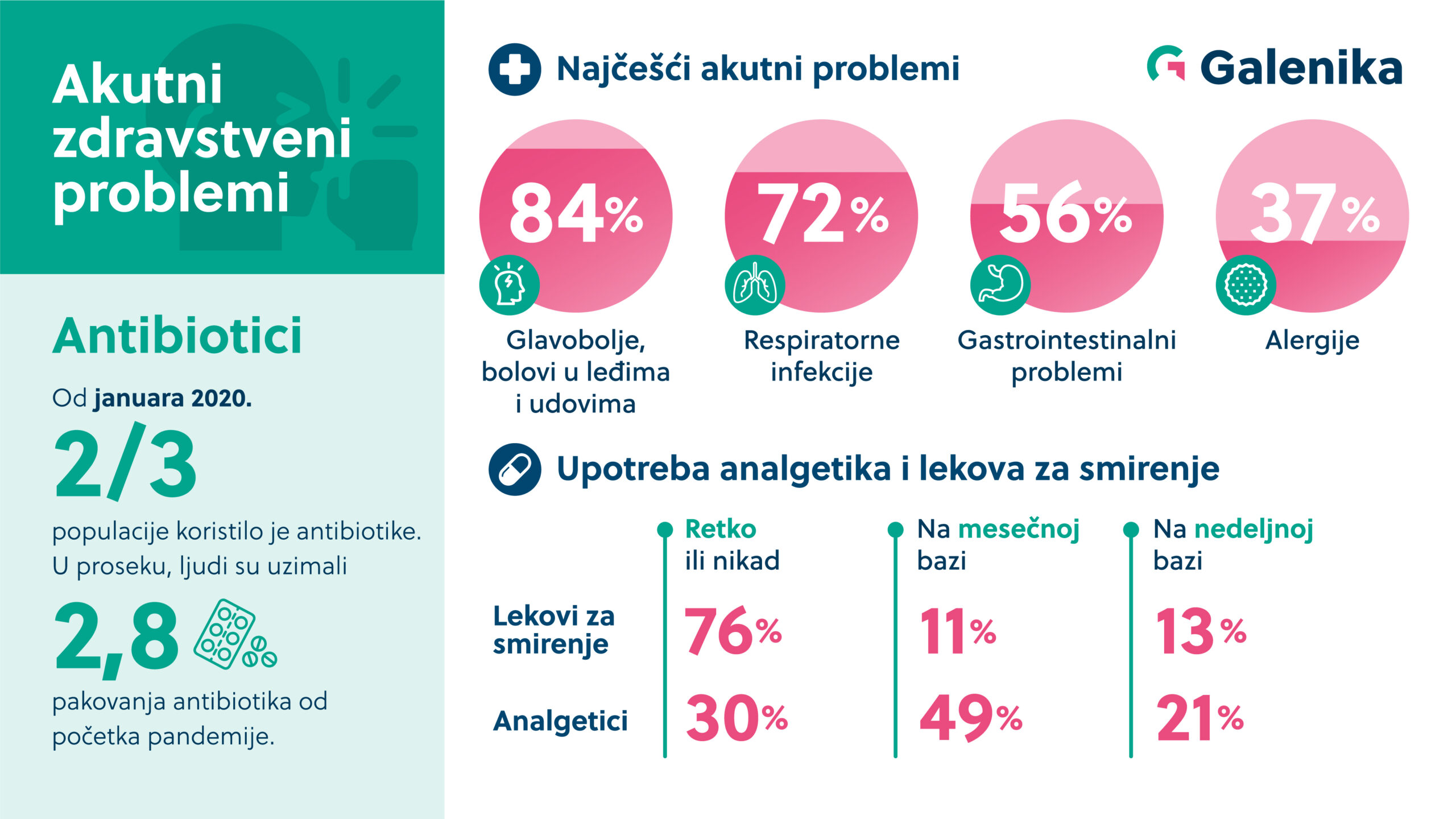