In terms of political dialogue there isn’t much more to improve. Economics remains the field where we have turned our attention to and seek improvement.

The ambassador of Bulgaria in Serbia, H.E. Mr. Petko Doykov, spoke for Diplomacy and Commerce about state and diplomatic relations between two countries, as well as about new cooperations among old ones like in energy sector, and about Open Balkans and Bulgarian minority in Serbia.

We are quite satisfied with the current level and intensity of political dialogue between our two countries. In the last few years it has become the norm to have at least a couple of ministerial visits per year in Bulgaria and Serbia respectively and to have at least one meeting on the highest level – President or Prime-Minister. Even in the times of Covid-19, this practice continued – in 2021 President Radev met with President Vucic in Dimitrovgrad and in early February this year Prime Minister Kiril Petkov met with Prime Minister Ana Brnabić.

Our goal is to make sure this excellent level of political dialogue transfers into concrete actions and results. Currently, we are extensively working on expanding our cooperation in the area of energy, most notably through construction of common gas infrastructure, and through expanding and modernizing road and railway infrastructure connecting our two countries.

During the visit of Prime Minister Petkov possibilities for expanded cooperation in the area of economics were also discussed – in the areas of tourism through common touristic packages and in the area of IT and innovations.

How can the cooperation between the two countries become even better?

As I already mentioned, we are now focusing on economics and infrastructure as means of enhancing our cooperation not just politically, but on a more practical level. Both Bulgaria and Serbia are developing economies and thus expanding mutual interconnectivity is definitely a key step into rallying more foreign investment and spurring economic growth.

Overall, in terms of political dialogue there isn’t much more to improve. Economics remains the field where we have turned our attention to and seek improvement.

Bulgaria and Serbia have strong cooperation in the energy sector. What do you think of this initiative of the unified gas market consisting of Serbia, Bulgaria, Greece and North Macedonia? In addition to gas, could a similar initiative be used in other energy segments such as renewable energy sources, Serbia’s participation in expanding nuclear capacity in Bulgaria and the like?

The Republic of Bulgaria and the Republic of Serbia maintain active bilateral relations in the field of energy. Cooperation between the two countries in the field of energy is important for increasing energy security in the region. The constructive contacts at the political level, between the line ministries and the business, as well as the participation in joint initiatives contribute to the active cooperation between the two countries.

Building a single energy market is one of the EU’s top priorities for achieving security of energy supply at competitive prices.

An important step in the unification of energy markets in Europe is the establishment of an electricity market in the countries of the Energy Community, including the Republic of Serbia and the Republic of Northern Macedonia, as well as other Western Balkan countries included in the Western Balkans 6 initiative. WB6). This initiative will help increase the region’s diversification and energy independence. To this end, it is necessary to harmonize the legislation in the countries of the Western Balkans with the EU rules.

A day-ahead market connection project between Serbia and Bulgaria, including the Croatian market area, has also been launched, for which regulators, transmission system operators and electricity exchanges in Bulgaria, Serbia and Croatia have already successfully completed a study on the feasibility of a tripartite market integration initiative “. Some legislative changes and reforms are needed in the Republic of Serbia.

Building a single energy market is one of the EU’s top priorities for achieving security of energy supply at competitive prices.

During the visit of the Bulgarian Prime Minister, special attention was paid to the opportunities for accelerating the development of the natural gas market in the region, which will be possible thanks to the planned and existing gas infrastructure. In this context, the project for interconnection reverse gas connection Bulgaria – Serbia plays an important role. IBS is one of the priority projects between Bulgaria and Serbia. The interconnector will contribute to the diversification of routes and sources of supply, enabling the Republic of Serbia and the countries in the region to receive natural gas from the Southern Gas Corridor and access the global liquefied natural gas market through the LNG terminal near Alexandroupolis.

Undoubtedly, there are opportunities for expanding cooperation in other areas as well, such as harnessing the potential and deployment of energy from renewable sources, increasing energy efficiency and, last but not least, nuclear energy for civilian purposes.

As you know, the European Green Deal aims to make the EU climate neutral by 2050 in a way that contributes to the European economy, provides growth and jobs. This target requires a 55% reduction in greenhouse gas emissions by 2030, which in turn implies significantly higher shares of energy from renewable sources in the integrated energy system. The Bulgarian side is interested in projects to exploit the potential of solar energy and water basins; bio-based resource efficiency projects, incl. bio raw materials and biogas, as well as waste management and recovery and the implementation of the circular economy and the cascading use of resources. In connection with the principle of putting energy efficiency first, we also attach great importance to the development, construction and implementation of new resource materials.

For Bulgaria, nuclear energy is a key element in the transition to a low-carbon economy and achieving the EU’s increased climate ambitions. We believe that the role of nuclear energy as ‘clean’ energy should be adequately taken into account in the development of green transition policies. The country has a well-established tradition in the nuclear field and has been developing a nuclear program for peaceful purposes for more than 45 years, which guarantees basic electricity production with predictable and competitive prices.

According to the Government’s Coalition Agreement, a decision is to be made on whether and with what technologies the Bulgarian nuclear program will be continued. 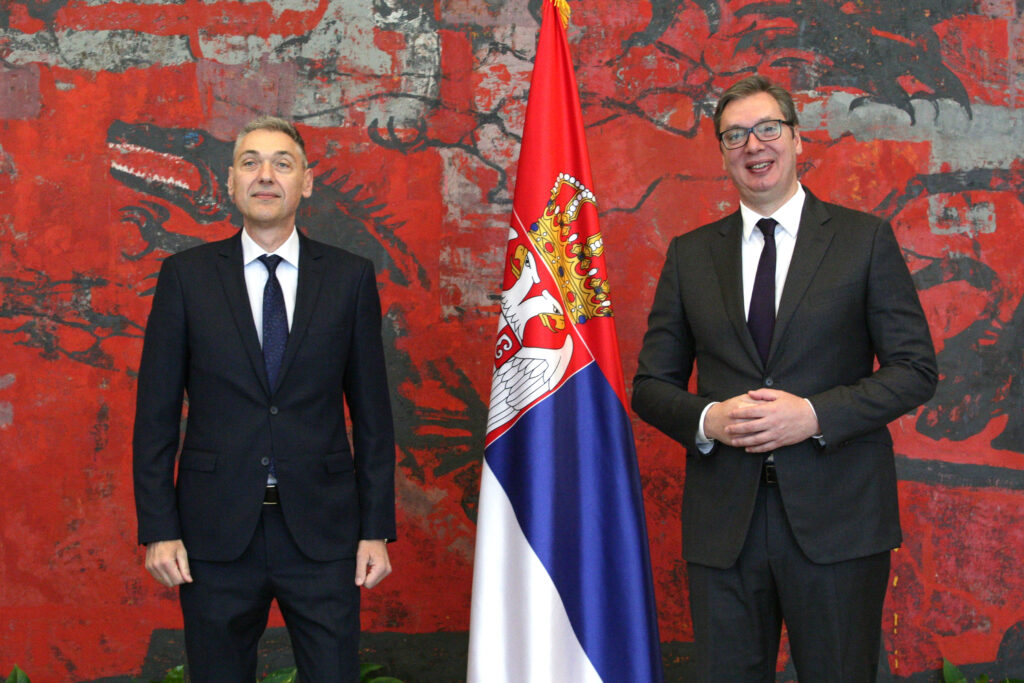 ln 2021, the presidents of Serbia and Bulgaria, Aleksandar Vucic and Rumen Radev, respectively, agreed to improve economic cooperation between the two countries, and it was announced that three companies from Bulgaria will open production plants in Dimitrovgrad. Did this happen and if not, are there any new initiatives regarding this idea?

The geographical, cultural and linguistic proximity between Bulgaria and Serbia favors active and multilateral economic ties. There is potential for intensifying economic relations in order to increase trade and bilateral investment. Serbia has a huge economic potential, as Bulgarian entrepreneurs are interested in investing in the Balkan region, especially in Serbia, which in turn further stimulates interest in developing our economic relations. This closeness between the two countries and the opportunities for economic development are the factors that influence the process and are the basis of cooperation between the two countries. This was the focus of the talks between the two presidents. They stressed the need to strengthen economic co-operation, given the potential and opportunities for development, especially in the border areas between the two countries.

Good neighborly relations and regional cooperation in the Western Balkans are essential elements in the stabilization and association process and in the framework of EU enlargement.

During the visit (July 1, 2021), the then Minister of Economy, currently Prime Minister of the Republic of Bulgaria, Mr. Kiril Petkov, was informed about the three Bulgarian investments in the free zone of Dimitrovgrad. The pandemic of COVID-19 caused a certain delay in the realization of the investments in question, but from the contact that the Bulgarian institutions, incl. the Embassy have with the companies, they confirm their commitment and intentions to implement their projects, which I believe will take place in the near future.

Good neighborly relations and regional cooperation in the Western Balkans are essential elements in the stabilization and association process and in the framework of EU enlargement. Infrastructural connectivity, both within the Western Balkans and between the region and its neighboring EU member states, is a priority. The construction of the multimodal Corridor № 8 (highway, railway infrastructure, etc.) has the necessary political support from Bulgaria.

How would you rate the current state of the Bulgarian minority’s rights in Serbia and in which area can we make more progress?

The state of the Bulgarian minority in Serbia is an important element to our relations. It is a link for friendship and co-operation between our neighboring countries. My feeling is that things are moving in the right direction. The legal and institutional framework regarding national minorities in Serbia is good enough and represents a solid basis for constructing a suitable environment in the area of minorities’ rights. On the other hand, Serbia is on the path to the big EU family, which Bulgaria wholeheartedly supports. The establishment of the new Ministry of Human and Minority Rights and Social Dialogue and the appointment of Gordana Čomić as Minister is also a good point. This is an important step towards improving the status of national minorities in Serbia and tackling the unresolved issues they face, as well as a useful tool for implementing the necessary reforms stemming from Chapters 23 and 24 of the EU accession negotiations. As for the practical side, unfortunately the implementation of the rules across the country is not so effective and consistent. In particular in the areas of education, public broadcasting in minority languages. There is also room for improvement in the process of election of the National Councils of National Minorities. In 2018 Bulgaria noted some problems in that area. In our opinion, independent monitoring and evaluation of the election process would ensure the proper functioning and usefulness of the National Councils. We expect to see progress in printing textbooks in Bulgarian for preschool, primary and secondary education, and the introduction of Bulgarian language education in kindergartens. The lack of additional curriculum (30% content supplements) to textbooks in geography, history, music and arts is another problem that must be resolved. We note with regret that there are still some worrying cases of hate speech in the public sphere. In this regard we count on the Serbian institution to react on this destructive element. Our wish is Bulgarians in Serbia to always be involved in the development of relations between our two countries.