At the ” Using transparency to achieve greater accountability of institutions” conference held in Belgrade on June 16th, organization Partners Serbia presented the results of two surveys showing that institutions in Serbia are among the most closed in the region and that the coronavirus pandemic has further affected the reduction of transparency of authorities, especially when it comes to public procurement of medical equipment and materials.

Within the Regional Openness Index, a network of NGOs: the Centre for Democratic Transition (Montenegro), Why not? (Bosnia and Herzegovina), the Metamorphosis Foundation (Northern Macedonia) and Partners Serbia, conducted annual surveys on the openness of executive and legislative institutions in Bosnia and Herzegovina, Montenegro, Northern Macedonia, and Serbia. Monitoring was first conducted in 2017 and has been conducted regularly ever since. 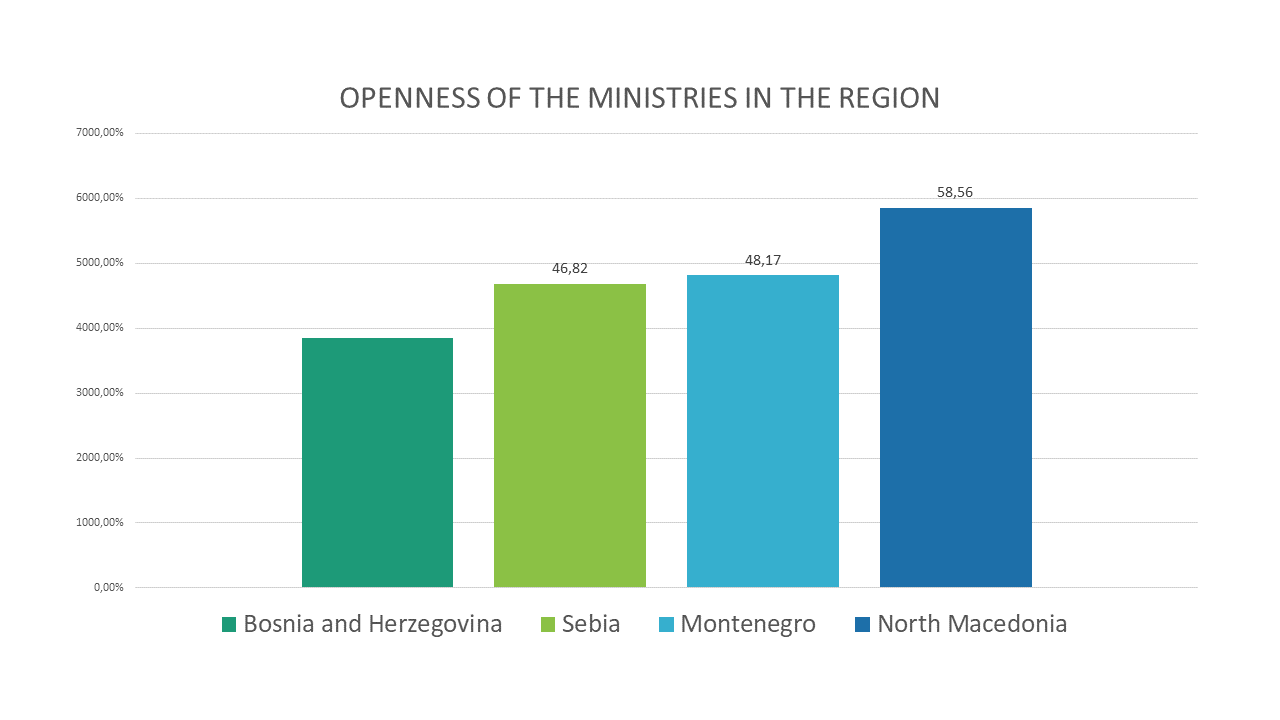 The openness of the institutions of executive and legislative authority is implemented through 4 thematic areas: transparency, accessibility, integrity, and awareness and each of these areas contains different indicators. The principle of transparency implies that organizational information, budget, and public procurement procedures are publicly available and published. Accessibility is about ensuring and respecting procedures for free access to information, as well as improving the availability of information through a mechanism of public discussion and strengthening interaction with citizens, through various e-services, and digital communication with citizens. Integrity includes the availability of mechanisms for the prevention of corruption, while awareness relates to monitoring and evaluation of policies implemented by institutions. 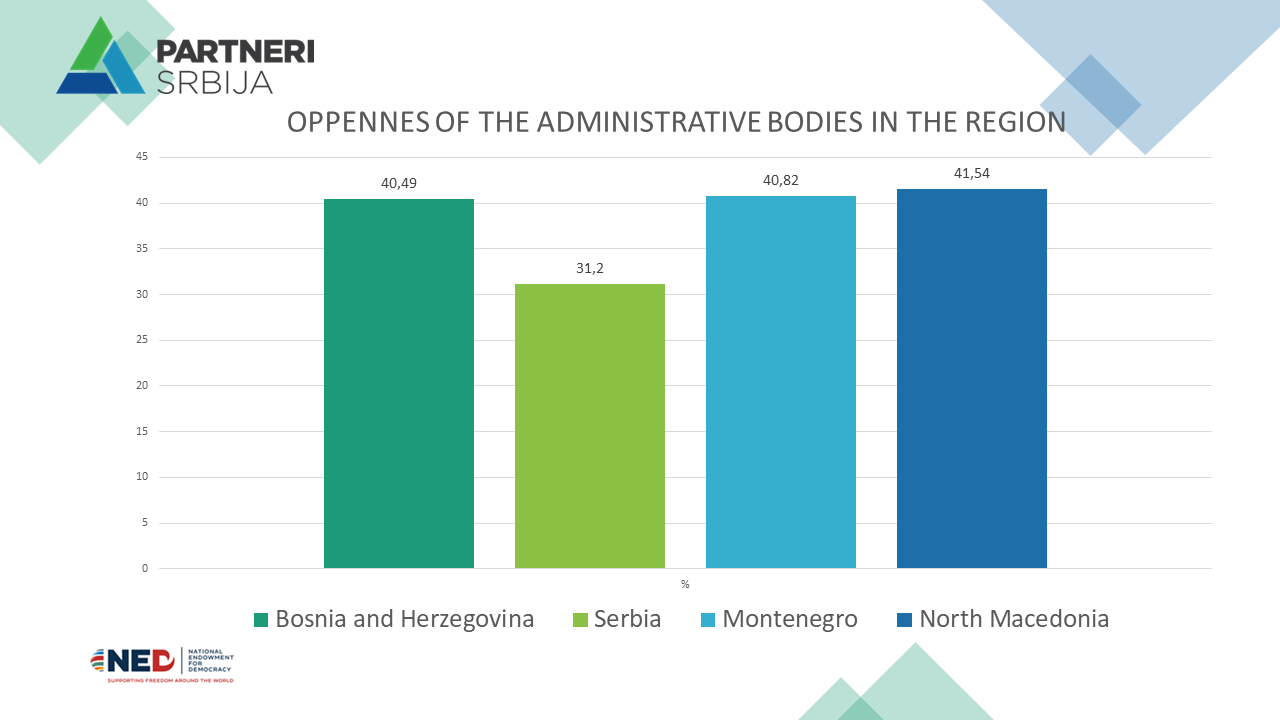 In Serbia, monitoring was conducted on a sample consisting of the National Assembly, the Government, the Assembly of Autonomous Province of Vojvodina, and the Provincial Government of Vojvodina, all ministries (21 of them), and 44 executive agencies.

The results of this year’s monitoring show that Serbia has met 26.74% of all observed indicators and holds 3rd place among the four countries analyzed in the region. At the end of this list is Bosnia and Herzegovina with 21.31% of the fulfillment of the indicators, while Montenegro is second, and the highest-ranked when it comes to openness is Northern Macedonia with 33.14% of all criteria.

When we observe the results by the types of institutions, the situation is not much better.

Monitoring of parliaments of all four states shows that Serbian two assemblies are the most closed, meeting 43% of the indicators, followed by Bosnia and Herzegovina with 46.25%, followed by North Macedonia with 72% and Montenegro with 85%. This indicates that the first-ranking state has nearly two times more open parliament than our country.

When we look at the openness of the governments of these 4 countries, Serbia again occupies last place with a percentage of 38%, while the first-place government of Northern Macedonia has 82%.

When it comes to openness of the ministries in the region, all four countries here are fairly even because the lowest-ranked state – Bosnia and Herzegovina, meets 38%, Serbia is rated at 37%, while the best score is northern Macedonia, with approximately 58% of the indicators met. 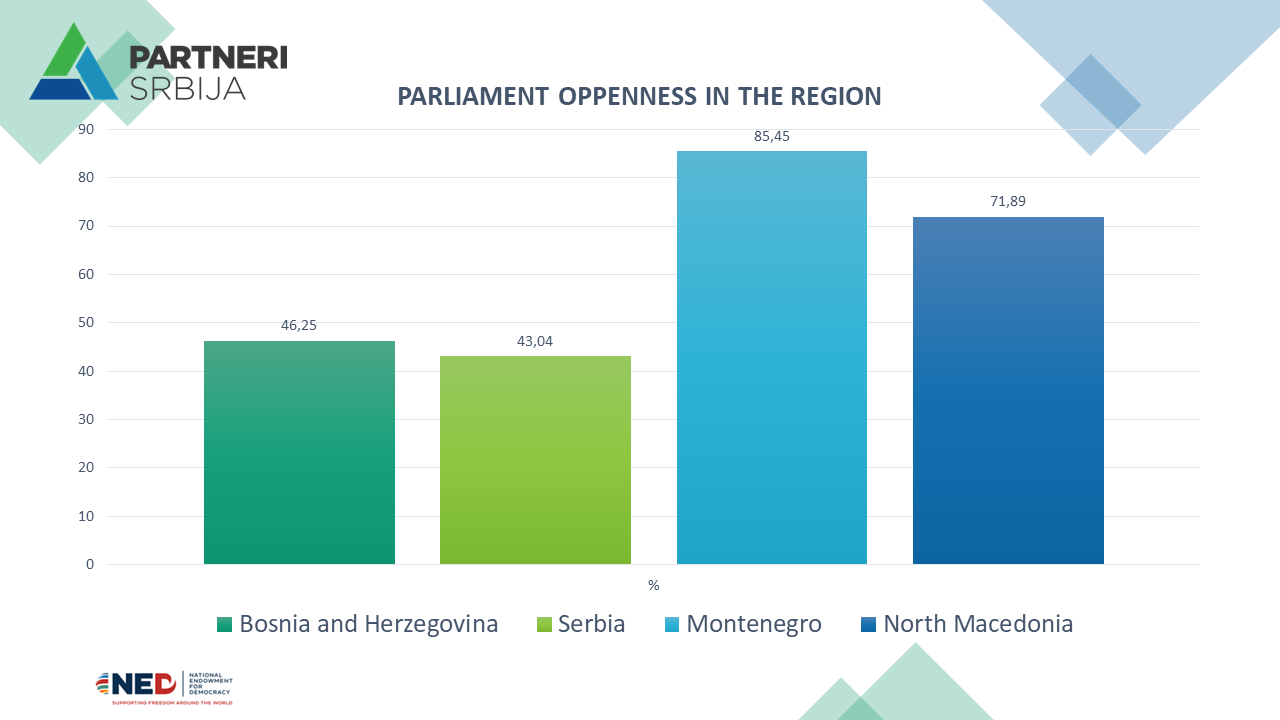 Executive agencies of all countries are traditionally the most closed, and in this category, Serbia has the worst results, with 31% of the indicators, while the highest-ranking Northern Macedonia meets about 42% of all indicators.

These are just statistics, and they don’t really tell us much until we look at concrete indicators our institutions didn’t meet, so: neither the republic nor the provincial government publishes agendas, records, and transcripts from sessions, nor documents that are discussed in sessions.  The websites of both institutions don’t provide documents related to financial plans and reports, final accounts, and budget proposals.

The trend of reducing transparency levels has also been demonstrated by analyses of public procurement of medical equipment and materials during the coronavirus pandemic. Thus, medical institutions have more often resorted to negotiation proceedings without public invitations that are less transparent, citing the urgency of the pandemic situation. There were also frequent procedures with one bidder, even in situations where there were several entities on the market that could make an offer. The research also pointed to the common practice of concluding framework agreements, followed by the conclusion of public procurement agreements.   Thus, although in the period before the pandemic the conclusion of the framework agreement with only one supplier was an exception, in the pandemic they become a rule.  That is shown for example in public procurements of materials for the maintenance of cleanliness and sanitary and medical supplies for the needs of COVID hospital in Krusevac, where 54% of procurements ended with the conclusion of a framework agreement with only one entity. Medical institutions did not adequately analyze the market, so there are big price differences for the same types of goods supplied by different institutions, as well as differences in estimated and offered prices. 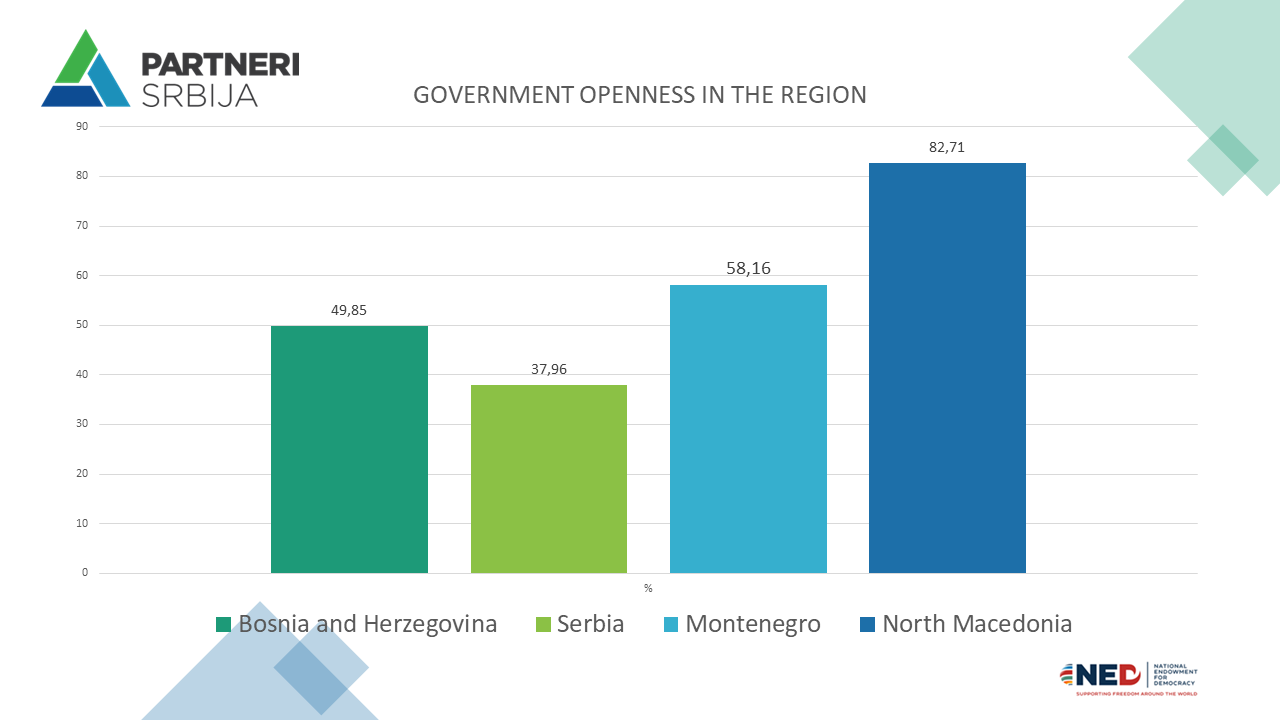 The conference was organized under the project “Public Secrets in Public Health”, with the support of the Balkan Fund for Democracy of the German Marshall Fund USA (BTD) and the National Endowment for Democracy (NED). Participants of the conference were Slavoljupka Pavlovic (assistant secretary-general of the Commissioner for Information of Public Importance and Personal Data Protection), Natasa Petrovic from the Balkan Trust for Democracy, Ana Toskic Cvetinovic (executive Director of Partners Serbia), Milica Kovacevic (program Director of the Centre for Democratic Transition Montenegro),  Zoran Strika (journalist in Portal 021), Kristina Kalajdzic (researcher at Partners Serbia), Marina Mijatovic (Legal Scanner), Katarina Baletic (journalist from New Economy), Damjan Ozegovic (Transparency International BiH) and Rade Panic (representative of the Union of Doctors and Pharmacists of Serbia).