Maxim Vengerov and Simon Trpčeski on June 29th at Kolarac at 8 p.m. 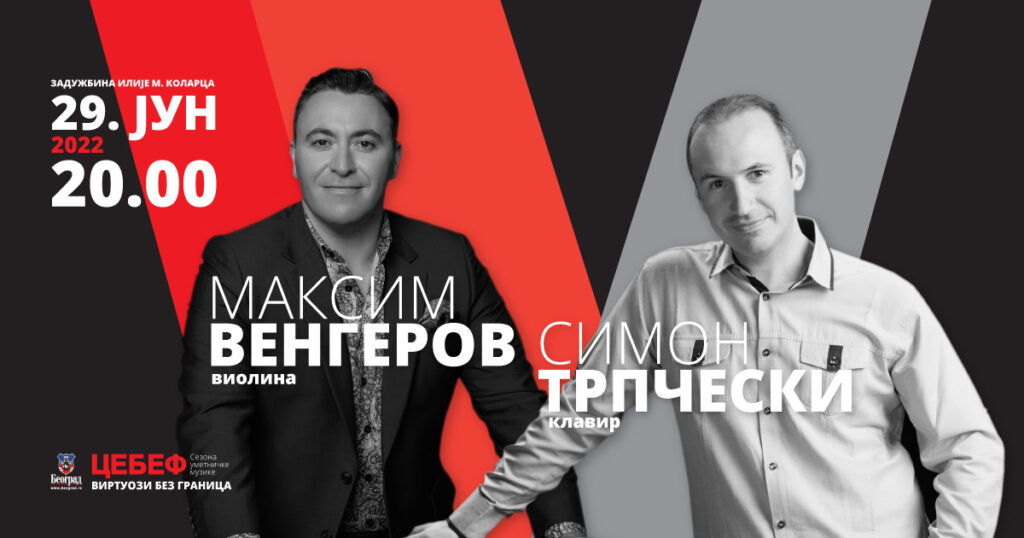 Often referred to as the greatest living string player in the world, Grammy award winner Maxim Vengerov is one of the most sought-after soloists and conductors of today. Born in 1974, he started playing the violin at the age of five. At the age of ten, he won an international competition, after which he made his first recording. A string of successes at international competitions followed. He studied with Galina Turchaninova and Zakhar Bron and his extensive discography includes releases for reputable companies such as Melodija, Teldec and EMI.

In January 2020, Vengerov became the first solo artist at the residence of Classic FM radio, for which he exclusively recorded Tchaikovsky’s Violin Concerto with conductor Myung-whun Chung and the French Radio Philharmonic Orchestra, as well as a recital from Carnegie Hall. Further recordings will coincide with the celebration of the fortieth anniversary of his concert career on the stage of the Royal Albert Hall in London, in September 2022. On that occasion, he will be joined on stage by his colleagues Mischa Maisky, Martha Argerich, the Oxford Philharmonic with its music director Marios Papadopoulos, as well as students from the Royal College of Music in London.

Maxim Vengerov is also very active as a violin pedagogue. He is a professor at the Mozarteum University in Salzburg and a visiting professor at the Royal College of Music in London. He is a member of numerous juries at competitions for young musicians around the world, such as the prestigious ‘Menuhin’ and ‘Wieniawski’ violin competitions. Wanting to democratize the approach to learning music, he launched his own pedagogical online platform www.maximvengerov.com in January 2021, which has so far been visited by users from 170 countries and has had over 190 million views.

In 1997, he became the first classical musician to be appointed an International Goodwill Ambassador by UNICEF, which enabled him to continue to inspire children around the world through music. In this role, he has advocated for vulnerable children and communities in Uganda, Thailand, the Balkans and Turkey, while helping to raise funds for many UNICEF-supported programmes. He is also the patron of the MIAGI project in South Africa, which connects children of different ethnic backgrounds through music. In 2018, he became the Goodwill Ambassador of the Musica Mundi School – an inimitable institution that supports young talents.

Several documentaries have been made about his life and work, such as ‘Playing by Heart’ produced by Channel Four Television, which was broadcast at the Cannes Film Festival in 1999, or ‘Living the Dream’, which had a world distribution and won the Gramophone Award for Best Documentary in 2008.

Vengerov is the recipient of prestigious awards of institutions such as the Royal Academy of Music (Great Britain), the National Order of Merit (Romania) and the Saarland Order of Merit in Germany. In 2012, he became a visiting professor at Trinity College of the University of Oxford, and in 2019 he received an honorary doctorate from the Royal College of Music in London and the Order of Cultural Merit of the Palace of Monte Carlo.

Pianist Simon Trpčeski has built a reputation thanks to his powerful virtuosity and deep expressiveness, as well as his charismatic stage performance. His breakthrough on the international scene came twenty years ago, as part of the BBC New-Generation Artist. In the course of his career so far, he has collaborated with more than a hundred orchestras on four continents and performed on the most prestigious concert stages in the world.

Trpčeski has had successful collaborations with record companies such as EMI Classics, Avie Records, Wigmore Hall Live, Onyx Classics and Linn Records, for which he is currently recording, resulting in a number of award-winning releases, with a repertoire that includes complete works by Rachmaninoff for piano and orchestra, Prokofiev’s piano concertos, as well as the works of composers such as Poulenc, Debussy, Ravel. His new CD called ‘Variations’ was released in the spring of 2022 and contains interpretations of compositions by Brahms, Beethoven and Mozart.

Born in 1979, Simon Trpčeski graduated from the Academy of Music of the Saints Cyril and Methodius University in Skopje, where he studied with Boris Romanov. Dedicated to spreading Macedonian culture and art, he initiated the MAKEDONISSIMO project to introduce audiences around the world to the richness of Macedonian folk music, combined with harmonic language and virtuosity inspired by contemporary jazz music. This project was presented with great success in Belgrade, as part of the CEBEF season of art music, in December 2018. It was also recorded for Linn Records.

In 2009, Trpčeski received the Macedonian Order of Merit by the Macedonian president, and in 2011, he was named Macedonia’s first-ever national artist. He was the BBC New Generation Artist from 2001 to 2003 and won the Young Artists Award for the most successful young artist, which was presented to him by the Royal Philharmonic Society of London.