Folk dances occupy an important place in the folklore of Montenegro. They are very diverse, because, for centuries, they were created to reflect the unique conditions that the people of Montenegro have been living in, and were adapted to their cultural and social needs 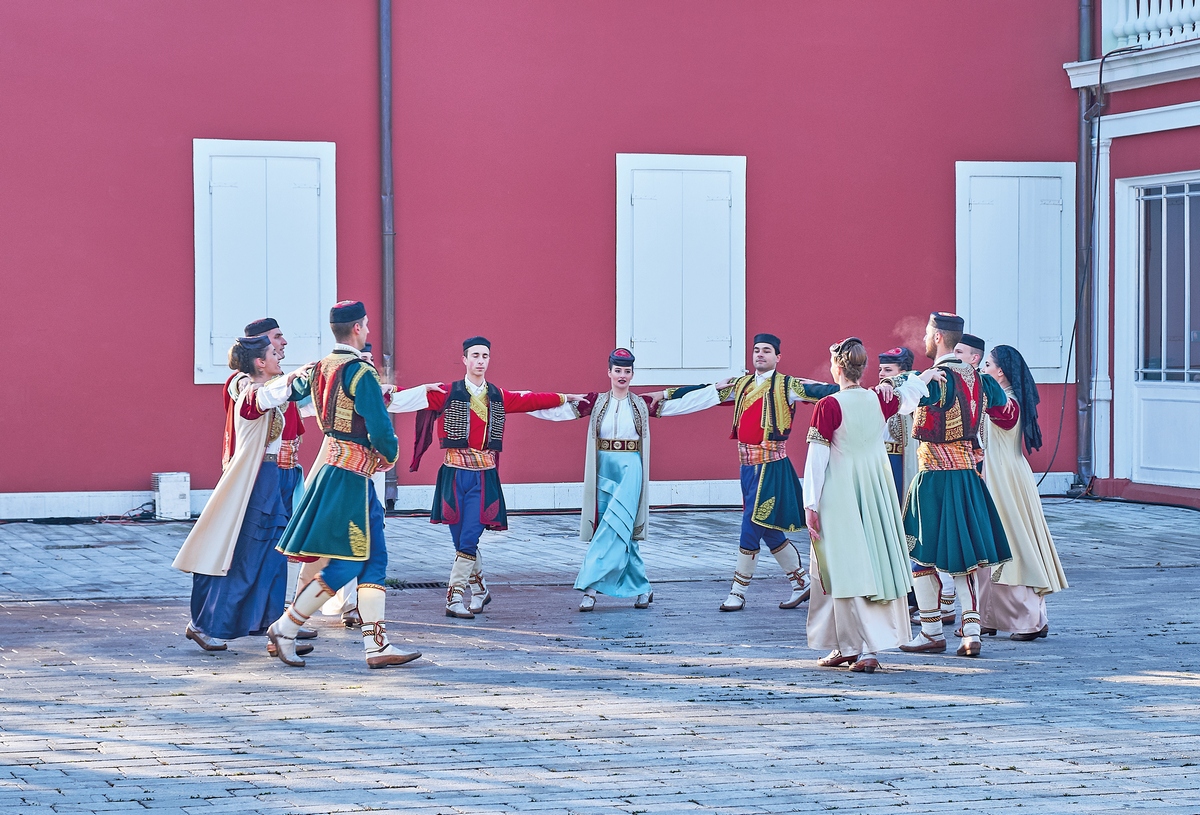 The word ‘oro’ originates from the Greek word “horos”, which means “gathering of people”, or “dance”. In his book “Montenegrin oro in Crmnica”, Velimir Vujović calls oro “a gathering of people who dance”. It is believed that the dance was named after the eagle (pronounced “o’ro” in the vernacular), since it symbolizes an eagle’s flight.

Folk dances occupy an important place in the folklore of Montenegro. They are very diverse, because, for centuries, they were created to reflect the unique conditions that the people of Montenegro have been living in, and were adapted to their cultural and social needs. In terms f their origin and development, Montenegrin folk dances mostly belong to the wider Dinaric and coastal folklore area, with those from Old Montenegro – Zetsko Kolo, Crmnički Oro and folk dance for two – is the most recognized.

People used to dance oro all across Montenegro – at home and in the meadows, day or night, during festivities at any time of the year. At night, the dancers were illuminated by the light of burning kindling wood. Almost no festivity would go without this dance. The dancers were encouraged by the song to enter the dance and to dance even better, faster and happier. That joy lasted a long time, sometimes until dawn. Earlier, these gatherings were frequent, and today they are few and far between and mostly take place during national holidays. The festivities were organized mainly in winter, during the holidays, when there was little to do at home. In summer, the people in Montenegro have a lot to do and not many festivities are held then. Those that do take place during summer are usually outdoors – on an area called gumno. The only time there was no folk dancing or singing is when a brotherhood, village or tribe is in mourning or grief over the death of a brother, farmer or nobleman. Adult men and women dance together in oro, regardless of whether they are married or not. Also, children learn this dance very early on and are often seen imitating adults in dancing. Dancing oro in an agile, precise and elegant manner is considered a virtue.

Town and village oro differ. There were some moves and figures that villagers use in dancing oro that are never used by oro dancers in towns as they are considered indecent. In towns, nobody danced oro if, for instance, an important public figure has died. In earlier times, in the valley of the Zeta River, there was a custom that once a family finished the construction of their house and were about to move in, they invited guests, mostly young boys and girls, to dance and they would be celebrating and dancing until early morning hours. Once all guests have left satisfied, the host was also happy with how the floor of the house looked as the dancers, while dancing, flattened the floor properly. At that time, houses didn’t have proper floors but were made from dirt or sand.

That’s Montenegrin dancing, but what about music? Montenegro’s long history of struggle for freedom and independence is invariably linked with strong traditions of oral epic poetry. Traditionally, they are delivered to the audience accompanied by the music produced by a gusle, a one-string instrument played by the storyteller (guslar), who sings or recites the stories of heroes and battles in decasyllabic verse. Historically, these songs have had immense motivational power over the population. The guslars commanded almost as much respect as the best of warriors, as they were as much the authors, thus history writers, as they were interpreters. Presently, these traditions are somewhat livelier in the northern parts of the country (also shared with people in eastern Herzegovina, western Serbia, and central Dalmatia).

The gusle player holds the instrument vertically between his knees, with the left hand on the strings

Gusle is a single-stringed musical instrument (and musical style) traditionally used in the Dinarides region of Southeastern Europe (in the Balkans). The instrument is always accompanied by singing, that is musical folklore and specifically epic poetry. The gusle player holds the instrument vertically between his knees, with the left hand on the strings. The strings are never pressed to the neck, giving a harmonic and unique sound.

The gusle consists of a wooden sound box, the maple being considered the best material (therefore often the instrument is referred to as “gusle javorove” – maple gusle), covered with animal skin and a neck with an intricately carved head. A bow is pulled over the string/s (made of horsetail), creating a dramatic and sharp sound, expressive and difficult to master. The string is made of thirty horsehairs.

The instrument is held vertically between the knees, with the left hand on the neck. The strings are never fully pressed to the instrument’s neck, giving a harmonic and unique sound. The most common and traditional version is single-stringed, while a much less-common version is the two-stringed one found in Bosanska Krajina and Lika. The varieties of the gusle music differ from culture to culture – the content of the stories of each ethnic group is different. There are minor differing characteristics of vocality in the regions of Southeast Europe, but the design of the instrument is identical – only the design of the neck and head varies as they can be decorated with different ethnic or national motives.