The Factory Museum, located in the remains of the former Goša production hall, and the exhibition titled “Music of Friends’ Footsteps” staged at the National Museum in Smederevska Palanka bear witness to the times when our connection with Europe was, if not closer, then certainly more sincere than today 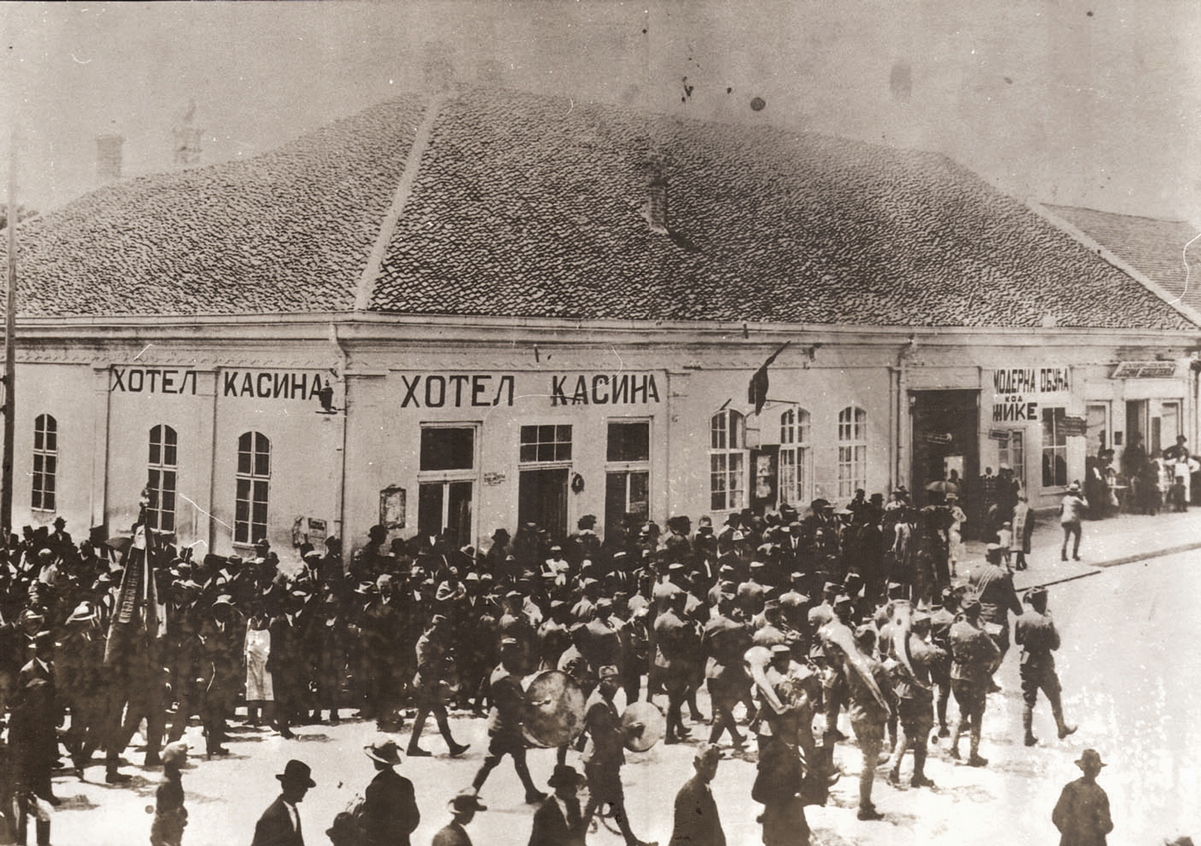 It is June 1926, less than eight years after the end of the Great War in which the Serbs and the French fought side by side, 286 people from Grenoble, Lyon and Chambery embarked on the train heading east to visit friends in distant Palanka in the Kingdom of Slovenes, Croats and Serbs.

The hosts were the Association of Friends of France, the Circle of Serbian Sisters (Kolo Srpskih Sestara) and the Obilić and Stanković choirs. On the political level, the French delegation was welcomed by the President of the Belgrade Municipal Court, Miloš Bobić, the Speaker of the National Assembly of the Kingdom of Serbs, Croats and Slovenes, Marko Trifković, the government’s cabinet and an envoy of King Aleksandar Karadjordjević.

The exhibition about this event opened recently at the National Museum in Smederevska Palanka and bears witness to a time when our cultural, economic and political ties with Europe were, if not stronger, then certainly more sincere than they seem today.

National anthems, solemn speeches of French and Serbian politicians and music were mandatory parts of every event

As we walk from his office to the National Museum, Nikola Vučen, the young president of the municipality of Smederevska Palanka, greets his fellow citizens on the street. He seems to be very popular. He is also planning to host the French ambassador and renewal of fraternal ties with Grenoble.

Ethnologist and anthropologist Petar Dekić, the exhibition’s curator and author, tells us about the mood of the people on the occasion of the arrival of the French delegation with thousands of people greeting them on the festively decorated streets of Belgrade.

“Wherever they went, they walked in a procession carrying flags, accompanied by music (the Royal Guard Orchestra), while numerous citizens of Belgrade and Palanka respectively and joyfully, to quote the press of the time, followed them. National anthems, solemn speeches of French and Serbian politicians and music were mandatory parts of every event,” says Mr Dekić.

The exhibition’s author explains that the French were offered a choice of 35 towns in Serbia. There is no reliable information as to why they chose Palanka, and it is believed that several factors played a role: the proximity to Belgrade and the possibility of travelling by train, the rustic ambience, and the fact that the French factory Jasenica was located in Palanka must have been important.

The testimonies left behind from this visit are contained in the “Book of memories of the visit of dear friends from France” (a collection of more than 50 newspaper articles published in the Kingdom of Serbs, Croats and Slovenes that follow the journey and events hour-by-hour and event- to-event) and the book “From Grenoble to Serbia with Orpheon”, written by Auguste Bouvreuil. There are also photographs from private ownership and archives that directly bear witness to the events and their prehistory.

In addition to the original testimonies, there are also photos on bilingual Serbian-French billboards, as well as interactive tools such as QR codes with links to certain sound and music recordings, as well as video clips that depict the event itself and the atmosphere of that time.

On the morning of June 6, the guests were treated to a ride on the Sava and Danube on the Saint Nicholas ship, and after the speeches and lunch, everyone danced. After this, the French, accompanied by their hosts, went on a tour of Košutnjak and Topčider, where they watched a concert held at the Soko Stadium.

At 8:00 p.m., they attended a concert, staged for them at the National Theatre, and watched the performance of Hristić’s opera “The Twilight” (“Suton”) and the ballet Giselle.

The next day, the train from Belgrade left for the second stop of their visit. This is how the journalist from Novosti daily described it – “We had an apotheosis in Palanka. The whole town, farmers, men and women from the surrounding villages, in colourful folk costumes, old and young, big and small, all of them gathered at the station to see us. The sight was magnificent. With frenetic and enthusiastic shouts of ‘Vive la France!’ the train entered the station. Suddenly, there was silence! Mr Aćim Banković, an agriculture engineer, welcomed the guests with carefully chosen words: ‘You are in the surroundings which had known you for a long time – from the difficult days of the terrible year 1915, when you lent us a helping hand and rescued us from misery to today. We owe you our freedom. Today is the most solemn day of our lives. Today we can show you how strongly our hearts beat for France. The craftsmen left their work and the farmers left their fields for a day to open their hearts and souls to you here, just as you did it to us during our darkest days!”

The most touching moment was when little Ljubica Hajduković, a fifth-grade pupil, welcomed the guests in French while wearing an original national costume. She said: “We don’t have palaces and parks, but we have a big heart that will beat forever for our dear and sweet France.”

The area behind the station was strewn with flowers. They passed through a barrage of girls and men, dressed in festive folk costumes. The procession stretched on endlessly. Flowers were thrown from the balconies of houses, kisses were sent…

“At two o’clock in the afternoon, a big banquet was arranged for the guests in Palanački Kiseljak. There were about 500 guests. The municipal authorities made sure that no one – except the journalists – remained hungry and thirsty. Lambs and piglets were baking on spits. Beer was poured as if it were an election campaign. For everything to function as it should, the army served the meals. The most interesting moment was when 72 soldiers lined up with the same number of gibanica (cheese pie) pans. In line with the military regulations, they paraded with the gibanica in step. Their arrival caused a storm of applause and the cheerful French shouted: ‘Long live the gibanica!’ The mood was wonderful. During the meal, the orchestra cheered up the guests with its beautiful arias. After lunch, countless speeches were given, while the impatient people couldn’t wait to start dancing kolo. Finally, the long-awaited moment came! Embraced in a hug, both the French and the Serbs danced with the ground beneath them shaking from thuds,” Novosti reported.

As a memory of this twinning, one of the main streets in Smederevska Palanka was named French Street. It is interesting to note that there is a beautiful villa at 7, French Street, similar to the one at the identical address in Belgrade.

Three streets in Grenoble were named after Serbia and Yugoslavia – Palanka Street, Belgrade Street and Yugoslavia Street, and they have retained their names to this day.

After the exhibition in the National Museum, we went to see the complex of the former industrial complex Goša. Of the former giant that employed 12,000 people, only the Goša FOM division remained, a part of the concern that was privatized by the former managers of the factory which now employs 700 people. They work all over the world – from Kostolac to Siberia. 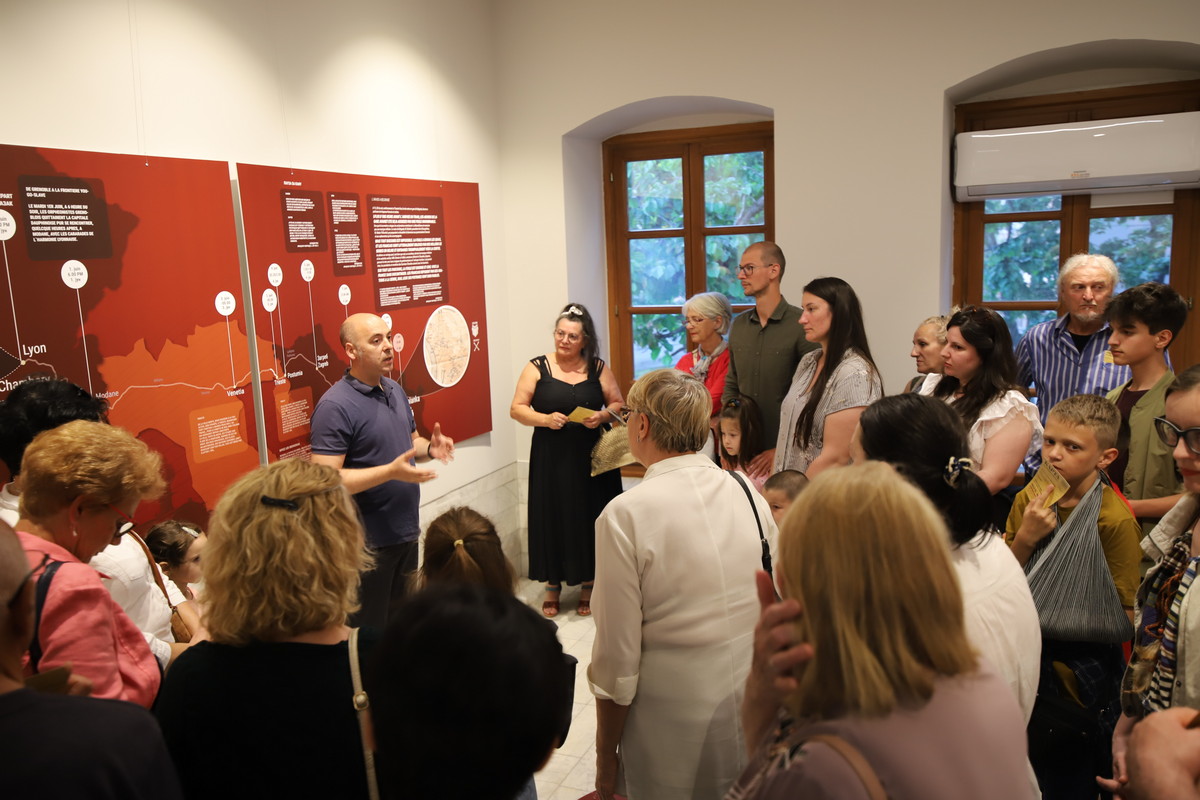 Thanks to them, the Factory Museum that we visited also survived, but it is not that well-known in Serbia.

The Jesenica joint-stock company, on the back of which Goša was founded and the industrialization of Smederevska Palanka began, is named after the local river. It was established in 1923 with the French-Serbian capital. The factory was named Goša in 1950 after a partisan hero from these parts, Dragoslav Djordjević Goša. Wagons, buses, trailers, electrical equipment, and bridge structures are just some of the products that came out of the company’s production halls that stand empty today.

The skilful workers of Goša have always been considered the best, and people say that Josip Broz Tito was one of them. There are no written traces of this myth which is probably based on Tito’s autobiography and the speeches he gave during his three visits to Goša. Nevertheless, people in Palanka believe that Tito lived here and worked in Jasenica in late 1926 and 1927. We perused old photos from the factory halls, scenes from workers’ riots, trains and trams made here, documentation from the time when the French ran the factory…

We are joined by a woman who worked for decades as a curator of the Goša Factory Museum, which was officially appropriately called the Josip Broz Tito Memorial Workshop. I ask her how the company’s disintegration started. She waves her hand and says: “We knew it wouldn’t be good when Mladjan’s people came in 2000 with some people from audit firms in expensive suits and laptops, speaking in barely full sentences.” The final blow to Goša was delivered by the Slovakian national Ivan Hemšild, whose company Jos Trnava sold Goša overnight to the Cypriot company Lisnart Holdings Limited whose management left the company in ruins. Only stray dogs are roaming the company’s production halls today.