The building that houses the National Bank of Serbia, built in the style of Neo-Renaissance academicism, is one of the largest and most beautiful architectural objects in Belgrade from the 19th century, which is why it is classified as a cultural monument that enjoys state protection

The National Bank of Serbia, one of the most important state institutions in the Republic of Serbia, was established as the sixteenth central bank in the world with domestic share capital. It became operational on July 2, 1884, following the passing of the Law on the Privileged National Bank of the Kingdom of Serbia, on January 6, 1883. The goal was to solve major financial problems, as dozens of different currencies were used in Serbia at that time, as well as to provide safe and cheap lending to the economy. 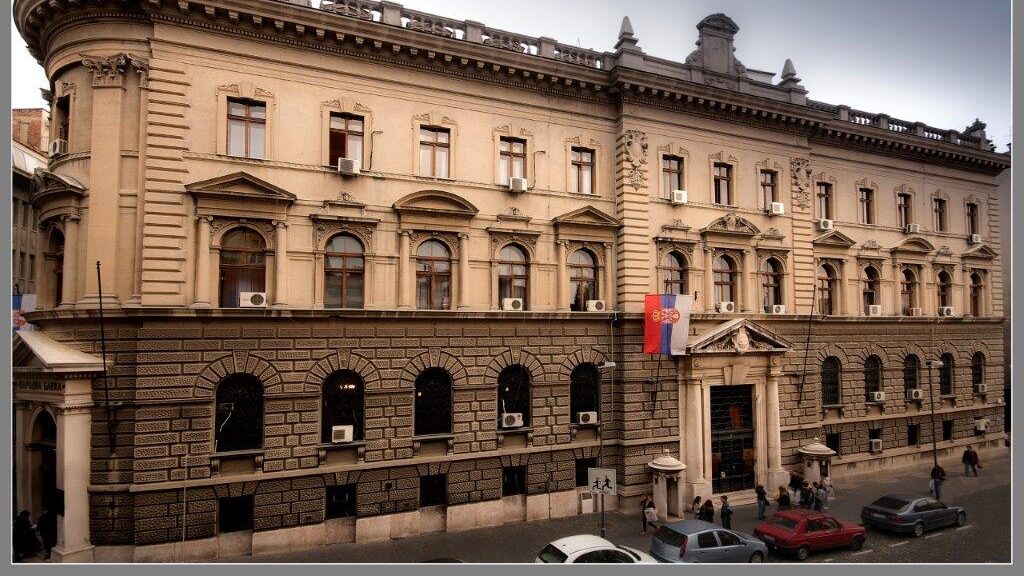 As the National Bank had not only major tasks concerning lending activities but also an issuing role, it had to have its own building. As noted in the relevant documents, the Bank had to be housed in its own building that would in every way meet its needs for many years to come. As early as 1886, the National Bank bought a plot of land in the centre of the Serbian capital, at 12 Dubrovačka Street (today Kralja Petra), on the site where Branislav Nušić was born. According to the report of the Bank’s Board of Directors, it was decided in 1887 that the building would be built and designed by Konstantin A. Jovanović, an architect from Vienna.

Jovanović’s architectural oeuvre territorially included three countries: Austria-Hungary, Serbia and Bulgaria. In Bulgaria, he had designed a number of buildings, most notably the National Parliament building in Sofia.

The building that houses the National Bank of Serbia, built in the style of Neo-Renaissance academicism, is one of the largest and most beautiful architectural objects in Belgrade from the 19th century, which is why it is classified as a cultural monument that enjoys state protection. The National Bank employees moved in in 1890, while Konstantin Jovanović received the Order of Saint Sava III for the architectural design of the building. The then administration, aware of how important is the building for Belgrade, architecturally-wise, wrote the following:” The National Bank has its own house now, which is completely solid in terms of the materials used, construction, layout and architectural beauty, as it perfectly suits the Bank’s needs and reputation.”

“The National Bank of Serbia’s building is one of the most monumental buildings in Belgrade, not only during the era in which it was built but also today”

After the proclamation of the Kingdom of Serbs, Croats and Slovenes, the building was upgraded from 1922 to 1925 due to the increased volume of work of the newly formed state. The extended part, built in the same style and with the same material as the original building, blended in nicely and style-wise, formed a complementing entity, taking up a complete block between Kralja Petra, Gračanička, Nikola Spasića and Cara Lazara streets.

Well-known building contractors from Szeged, Jirasek and Kraus, had been hired to carry out the construction work, while the façade is the work of the renowned façade master and painter Petras. An excellent connoisseur of the Renaissance, Konstantin Jovanović used the academic style characteristic of that time, showing his masterful skills in shaping both the exterior and interior of the building. He was also the interior decorator and chose all decorative details, doors and windows, stucco decorations and furniture, while the famous sculptor and painter Paško Vučetić, whom Moše Pijade helped out as his private student, painted the walls and vaulted ceiling.
Various arts and crafts were used in interior decoration and a combination of different materials and techniques was applied. Pillars and wall cladding in the halls, ground floor and first floor were made from multi-coloured marble and the stucco technique was used on some walls. Vaulted glass ceiling segments were made from multi-coloured stained glass.

In the gallery of the ceremonial hall, above the fan-shaped white marble staircase, there is a bronze bust called ‘Serbia’, the work of sculptor Đordje Jovanović, identical to the one that is a part of the Monument to Kosovo Heroes sculpture in Kruševac. The National Bank bought the sculpture after it was exhibited in the 1900 World Exhibition in Paris.

The National Bank of Serbia’s building is one of the greatest achievements of Serbian academic architecture and the best example of a building in the Neo-Renaissance style. It is one of the most monumental buildings in Belgrade, not only during the era in which it was built, but also today, and has remained one of the few buildings that has retained its original appearance and purpose.